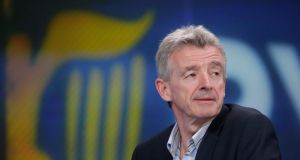 Ryanair chief executive Michael O’Leary. Shares in the airline jumped 3.6 per cent to €11.21 yesterday on foot of a 2 per cent reversal in oil prices, which wiped out gains from the previous two sessions. Photographer: Matthew Lloyd/Bloomberg

Britain’s top share index fell to one-month lows as voting got under way in what looked set to be one of the country’s closest national elections in decades. With the result uncertain, the vote could yield a weak government, push the world’s fifth largest economy a step closer to leaving the European Union and stoke Scottish desires for secession.

The Iseq index outperformed European rivals, closing up 0.8 per cent at 6,092. The strong performance was driven by index heavyweights Ryanair and Smurfit Kappa.

Ryanair jumped 3.6 per cent to €11.21 on foot of a 2 per cent reversal in oil prices, which wiped out gains from the previous two sessions.

Aer Lingus also benefitted from falling fuel costs, trading up 1.3 per cent at €2.38.

Packaging firm Smurfit Kappa bounced back 3.2 per cent to close at €26.90, partially reversing a 4.8 per cent decline on Wednesday, the result of a single seller late on in the session.

Kingspan also enjoyed a strong session, trading up 1.3 per cent at €18.55 after the insulation manufacturer reported a 28 per cent rise in revenue since the start of the year, its operations benefitting from a weaker euro.

Bank of Ireland rose 0.5 per cent to 34.7 cents in line with sector-wide shifts.

Uncertainty over the general election result has affected sterling more than stocks, which have been buoyed by a British economic recovery and record low interest rates. Nevertheless some traders said the risk of a “hung” parliament was weighing on the FTSE 100.

Brewer SABMiller gained 3.7 per cent, with traders citing talk of a possible bid from rival Anheuser-Busch. Both companies declined to comment on the speculation.

Data centre provider Telecity, which is in the FTSE 250 mid-cap index, surged by around 20 per cent after entering takeover talks with Equinix. European shares recouped most of their daily losses to trade modestly lower as a selloff in government bonds eased and the euro gave up its gains against the dollar. Germany’s Dax index, which is heavily export-oriented and benefits from a weak euro, led the recovery, trading 0.2 per cent higher.

Germany’s Beiersdorf rose 3.4 per cent to be the top Dax performer. The company reported that first-quarter core profit rose more than expected, helped by demand for its products in Eastern Europe.

Microsoft and Apple gave the biggest boost to the S&P 500 and the Nasdaq, while Yahoo rose 5.3 per cent to $43.84 on Alibaba’s strong results.

Alibaba’s shares jumped 7.3 per cent to $85.86 as the Chinese e-commerce giant reported a better-than-expected rise in quarterly revenue.

Tesla was down 1.1 per cent at $227.89 after it reported a wider quarterly loss and said the strong dollar would crimp gross margins.