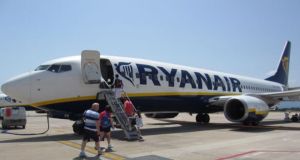 Ryanair closed up 1.2 per cent at ¤7.06 on a day in which it held an investor conference in London

European stocks had their worst day since November 2011 as investors digested the fear that the tap of quantitative easing might be turned off.

In a sell-off that devoured defensive stocks as well as the more cyclical, economically sensitive ones, just 20 of the 600 companies listed on the Stoxx Euro 600 index finished the day with gains, while this benchmark index dropped 3 per cent.

DUBLIN
The Iseq index managed to outperform the rest of Europe, declining only 1.26 per cent, because two of its larger stocks, Ryanair and Elan, both had reasons to make gains.

Elan climbed 4.15 per cent to €10.53 on the Dublin market after it was reported overnight that Forest Laboratories was sniffing around the pharmaceutical group with a view to making a bid.

Ryanair closed up 1.2 per cent at €7.06, having traded as high as €7.32 on a day in which it held an investor conference in London. The airline increased its annual passenger target to 110 million by 2019, up from the previous 100 million target, because it plans to retire fewer aircraft. It also announced plans for €400 million in share buybacks in its current financial year.

The Iseq’s other main stocks – including CRH, Kerry, Paddy Power, Smurfit Kappa, Bank of Ireland, C&C, Aer Lingus, Glanbia, Kingspan and Grafton – were all down.

LONDON
The FTSE 100 retreated 3 per cent, slumping to its lowest level since January 18th, and marking the biggest one-day fall since September 2011.

The blue-chip index has now fallen 10 per cent since a high on May 22nd when Bernanke first indicated the Federal Reserve could scale back its stimulus activities.

A gauge of London-listed mining companies dropped 4.7 per cent, for the lowest level since July 2009, after it emerged that China’s manufacturing shrank in June, for a second successive month.

Swatch, the biggest maker of Swiss watches, fell 5.2 per cent to 505.50 francs, while Richemont, owner of the Cartier brand, fell by the same percentage to 80.70 francs.

Eurotunnel, operator of the Channel tunnel between Britain and France, plunged 12 per cent to €5.49. Financial news group Les Échos reported the European Commission will demand toll reductions as freight and passenger rates are seen as excessive.

US
Stocks in New York fell in early trading, setting the Standard and Poor’s 500 index on course for its biggest two-day loss since November.

Mining stock Newmont dropped 4.7 per cent to $30.40 as gold plunged to the lowest in more than 2½ years.

Walt Disney fell 2.6 per cent to $62.65 for the largest decline in the Dow Jones index as all members of the 30-stock gauge slid.

GameStop added 5.1 per cent to $40.50, its highest level since September 2008, after Microsoft removed restrictions on reselling, trading and lending used games for its Xbox One home entertainment unit. – (Additional reporting: Bloomberg.)