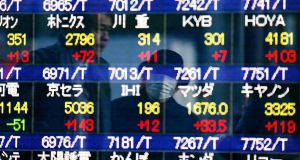 Japan’s Nikkei 225 lost 0.9 per cent and Australia’s commodity-rich S&P/ASX 200 shed 2.1 per cent. Hong Kong’s Hang Seng fell 1.2 per cent though, on the mainland, China’s Shanghai Composite was an outlier with an advance of 0.9 per cent as infrastructure shares firmed on hopes for more investment by Beijing.

The price of Brent crude, the international energy benchmark, is down 1.4 per cent to $32.79 a barrel, and West Texas Intermediate, the US-based marker, is slipping 2.4 per cent to $31.12 after Saudi Arabia poured cold water on hopes for a production cut.

Ali al-Naimi, the Saudi oil minister, on Tuesday ruled out a reduction in oil output to address a global supply glut, saying a deal by major producers to tighten the spigot was “not going to happen”.

The 20-day rolling correlation between Brent and global stocks is 78 per cent, as investors worry about the impact of declining energy prices on resources company profits, banks’ balance sheets, and moves by sovereign wealth funds of oil producing nations to sell financial assets to raise money.

BHP Billiton became the latest large resources group to cut its dividend in the face of lower commodity prices. Big US bank JPMorgan Chase has warned of growing stresses in its oil and gas portfolio, saying it would pump up its reserves for loan losses by about 60 per cent in the first quarter

Analysts at Bank of America Merrill Lynch said the broad decline in oil prices “has certainly rattled all asset markets, including rates, FX, equities and bonds - a shift that has increased the risks of a global recession in the near-term”.

Todd Elmer, a strategist at CitiFX, said the latest burst of investor caution may also be the result of fretting about “relatively weak data flow globally, ongoing concern with the Brexit referendum . . . and, perhaps, some sobering of expectations for the G20 [MEETING]following recent comments by US authorities downplaying the likelihood for major new initiatives”. ”

Japan’s Nikkei 225 lost 0.9 per cent and Australia’s commodity-rich S&P/ASX 200 shed 2.1 per cent. Hong Kong’s Hang Seng fell 1.2 per cent though, on the mainland, China’s Shanghai Composite was an outlier with an advance of 0.9 per cent as infrastructure shares firmed on hopes for more investment by Beijing.

In currencies the main focus of attention are sterling and the yen. The Japanese unit strengthened during Asian trading to Y111.70 per dollar, approaching a 15-month low hit a few weeks ago as it again took the mantle of main forex “haven” as stock markets retreated.

But the yen is now little changed on the day at Y112.10 as the mood brightens a touch at the European open.

Sterling has recovered some of its early losses but remains down 0.3 per cent to $1.3975, trading below $1.40 for the first time since 2009 amid concerns about the UK potentially voting to leave the EU.

Market watchers are starting to consider contagion effects of a “Brexit”, with the EU and the euro at risk of wider fragmentation should Britain vote to depart at the June 23 referendum.

“One other notable feature of the currency landscape is that the euro is no longer proving to be a beneficiary of safe haven flows/unwinding of euro-funded ‘carry trades’, with the prospect of UK ‘Brexit’ seen to be an almost equally bad news story for the EU,” said Ray Attrill, National Australia Bank’s global co-head of FX strategy.

The euro is on pace for a third straight day of declines, off 0.2 per cent to $1.0998 while benchmark 10-year Bund yields dip 3 basis points to 0.16 per cent as investors continue to price in additional easing by the European Central Bank at its policy meeting next month.

The 10-year Japanese government bond yield has hit a record low of minus 0.04 per cent on expectations the Bank of Japan will also add to its stimulus measures having already moved to a negative interest rate policy in an attempt to spark lending and boost growth.

Equivalent maturity US Treasuries are matching the global trend, off 2bp to 1.72 per cent, though unusually this fall in implied borrowing costs is not helping the interest rate sensitive gold price, which is down $2 to $1,225 an ounce.

Ireland is 13th most expensive place in the world to live 10:25
New online portal for people seeking to upskill or retrain 09:15
State plans Covid-19 testing for lorry drivers on ferries to France 08:22
China’s economy picked up speed to end 2020 in solid shape 08:12
Employers cautiously optimistic about 2021, recruitment survey finds 07:48