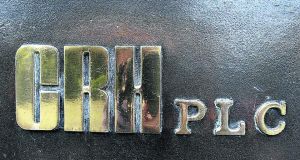 Analysts believe both sides will find a way to hold off on taking any action against Greece. At the same time, they point out that cheap credit and strong corporate balance sheets are likely to spur more merger and acquisitions, which will support European share prices.

Another one of the market’s bigger stocks, international packaging group, Smurfit Kappa, was off 0.4 per cent on news that a Mexican rival is boosting manufacturing capacity. Bank of Ireland tumbled 1.11 per cent to 35.6 cent after Citibank analysts published a note warning that the Irish lender remained vulnerable.

Property investment trust, Green Reit, slid 1.71 per cent to €1.555. It published an interim management statement yesterday saying building work has begun on an office block in its Central Park complex in Dublin. It has also secured €1.12 million in new contracted rent since the start of the year.

Energy shares fell back, however, with the UK Oil and Gas index down 0.7 percent, tracking a fall in crude oil prices.

Aberdeen Asset Management fell 0.4 percent after Societe Generale cut its stance on the stock to “hold” from “buy” and trimmed its target price to 485 pence from 490 pence.

Shares in Royal Mail rose 3.9 per cent after rival PostNL said it had suspended a UK delivery service called Whistl.

Airbus Group lost 2.1 per cent following the crash of a military plane. The stock’s slide helped drag down the French CAC 40 Index by 1.2 per cent, while Greece’s ASE Index slid 2.5 per cent. Piraeus Bank SA and Eurobank Ergasias lost more than 10 per cent as euro-area finance ministers met to discuss bailout aid.

Greek stocks fell for a second day. The nation has to pay about €750 million euros to the IMF today. Volkswagen and Continental AG dropped more than 1.3 per cent as China’s car sales fell in April.