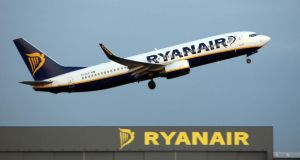 Stocks climbed yesterday as European Central Bank president Mario Draghi reiterated that interest rates will stay low for an extended period, while the Federal Reserve predicted a modest to moderate US recovery.

The bank kept its benchmark interest rate unchanged at a record-low after the 17-state euro zone returned to growth in the second quarter, growing by 0.3 per cent in the three months to the end of June. More recent indicators point to a further recovery in the second half.

Fund managers welcomed its president’s comments. “Draghi’s comments reinforce the view that the central bankers are in no mood to rush any rate rise and in no mood to spook the markets,” said Justin Urquhart Stewart, who helps oversee about $6.8 billion at Seven Investment Management in London.

DUBLIN
In Dublin, Ryanair’s share price appeared to stabilise yesterday after tumbling more than 11 per cent on Wednesday following a profit warning. The company reported that it carried a record 9.02 million passengers during August. It ended the day 0.65 per cent up at €6.039.

Index heavyweight – international building materials group CRH – put in a strong performance, gaining 3.28 per cent to close at €16.99. In a related area, insulation specialist, Kingspan was also solid, adding 1.23 per cent to end the day at €11.90.

LONDON
Dixons Retail jumped 5.9 per cent to 46.88 pence, its highest price in nearly five years. The UK’s largest electronics retailer said it is close to exiting its online unit, Pixmania, after getting an irrevocable offer from Germany’s Mutares. It has also agreed to sell its Turkish operations in transactions that will rid it of unprofitable businesses and enable it to focus on growth in its home market.

ICAP advanced 6.7 per cent to 400 pence. Morgan Stanley raised the world’s largest broker of transactions between banks to overweight, similar to a buy rating, from underweight and increased its target price on the stock to 418 pence.

Budget airline Easyjet gained 1.7 per cent to 1,236 pence after reporting that it flew 6.1 million passengers in August, compared with 5.87 million during the same month last year. The move eased losses sustained earlier in the week.

EUROPE
Peugeot, Europe’s second-biggest automaker, rose 5.4 per cent to €11.24. Chief executive Philippe Varin forecast an increase in market share in the third quarter, according to an interview with Le Parisien. The news boosted others in the sector.

Bayerische Motoren Werke AG, the biggest maker of luxury cars, added 6 per cent to €76.97, its highest price since at least 1992.

Telecom Italia jumped 8.4 per cent to €60.7. La Repubblica reported that Sawiris may buy a stake in the phone company.

US
Wall Street advanced on the back of data signalling improving economic conditions.

Industrial and construction supplies merchant Fastenal rose 6 per cent to $48.60 after reporting a 2.5 per cent jump in sales for August, making it the best performer in the S&P 500. Costco Wholesale’s shares climbed 1.9 per cent to $113.59.