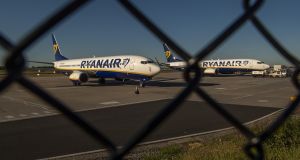 European stocks swung both ways before settling lower on Wednesday as investors awaited the US Federal Reserve’s first economic projections since the Covid-19 pandemic set off a recession in February.

The Iseq declined 0.4 per cent as a hesitant gain was erased in a lacklustre session during which markets across Europe ran out of steam. Ryanair fell 2.35 per cent to €11.86 on a weak day for airlines including Easyjet, Lufthansa and Aer Lingus-owner IAG. Building materials group CRH fell 1.3 per cent to €31.34, while Dalata Hotel Group finished 1.5 per cent lower at €3.29.

However, Kerry Group added 1 per cent to €109, and packaging company Smurfit Kappa also managed a climb, adding 0.6 per cent to €23.78. Paddy Power-owner Flutter Entertainment finished 2.25 per cent higher at €122.60.

London-listed stocks fell for the third straight session, as investors turned cautious ahead of the Fed’s policy decision. The blue-chip FTSE 100 closed 0.1 per cent lower and the British mid-cap index was 0.8 per cent down.

Travel and leisure stocks, including airline EasyJet, cinema operator Cineworld and cruise operator Carnival, were among the biggest decliners. Carnival, which is slated to leave the FTSE 100 later in the month, fell 9.8 per cent.

British stocks are now headed for their first negative week in four as a rally in the recent few weeks, which stemmed from hopes of a quicker recovery from the coronavirus-induced economic slump, ran out of gas.

Just Eat Takeaway.com fell 13 per cent as it said it was in advanced talks to buy Grubhub in an all-stock deal. Rolls Royce slipped 4.5 per cent after being removed from Goldman Sachs’ conviction list, which is the bank’s top picks for high net worth clients.

After gaining as much as 0.9 per cent at the open, the pan-European Stoxx 600 ended down 0.4 per cent, falling for a second straight session. Travel and leisure stocks led declines. The German Dax fell 0.7 per cent while the Cac 40 in Paris finished 0.8 per cent lower.

The banking index fell 1.3 per cent despite an early boost from a Reuters report that European Central Bank officials were drawing up a scheme to cope with potentially hundreds of billions of euros in unpaid loans.

Lufthansa slid 5.7 per cent after Germany said it planned to extend its travel warning to countries outside Europe until August 31st. Continental fell 3.6 per cent after a media report cited the German automotive supplier’s chief executive as saying it needed to save hundreds of millions of euros and would probably have to lay off workers due to a slump in demand caused by the pandemic.

The S&P 500 and Dow slipped as losses in financial stocks outweighed a boost from technology, with focus shifting to the Fed’s first projections on the economy since the coronavirus outbreak.

The tech-heavy Nasdaq, by contrast, hit a record high for the fourth straight session, with gains for Apple, Amazon. com and Microsoft driving a rally which has taken the index back into bull market territory.

The energy sector shed 3.5 per cent, as oil prices weakened after a rise in US crude inventories raised oversupply concerns.

AMC Entertainment Holdings jumped 9.6 per cent after saying it expects to reopen its movie theatres globally in July. Starbucks slipped 4.2 per cent as it expected current-quarter operating income to plunge by up to $2.2 billion, as well as sales declines for the rest of the year. – Additional reporting: Reuters