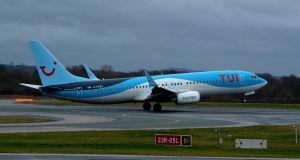 European shares rallied on Wednesday, with insurers jumping after France’s Axa said it would pay a dividend, while improving global economic data spurred bets of faster recovery from the coronavirus crisis than previously anticipated.

The Iseq climbed steadily over the course of the session and finished with a 3 per cent gain, as Ryanair joined in a rally for travel stocks. The airline closed up 6.3 per cent at €12.78. AIB surged 8.7 per cent to €1.13 on a good day for banking stocks across Europe, while Bank of Ireland added 3.8 per cent to €1.70 and Permanent TSB soared 10 per cent to 51 cent.

Building materials group CRH, the largest stock on the Dublin market, advanced 4.4 per cent to €31.58, while Dalata Hotel Group also recorded a gain, adding 4.7 per cent to €3.67. Cairn Homes finished 5 per cent higher at about 98 cent and food group Glanbia rose 3.9 per cent to €10.18.

UK shares closed at three-month highs as better-than-expected data from the world’s two largest economies pointed to an ongoing economic recovery from the coronavirus crisis.

The blue-chip FTSE 100 and the mid-cap FTSE 250 both added about 2.6 per cent as readings showed business activity in the US and China beginning to recover from the worst of the pandemic.

HSBC rose more than 4 per cent after its top executive in Asia, Peter Wong, signed a petition backing China’s imposition of a controversial national security law on Hong Kong.

Defence contractor Chemring Group soared 26 per cent as it maintained its annual targets and raised dividends after winning new orders.

The pan-European Stoxx 600 rose 2.5 per cent to close at its highest level since March 6th, with Germany’s Dax outpacing the rest of Europe with a 3.9 per cent gain. The German index recorded its strongest close since Feb 27th and is just 9.5 per cent below its all-time high.

Insurers, automakers, banks and travel stocks led the gains, rising between 3.8 per cent and 6.8 per cent. Axa jumped 10.4 per cent after saying it would pay a 2019 dividend to shareholders, and shares in Allianz, Prudential and Generali also rose between 7.8 per cent and 8.5 per cent.

Renault surged 10.5 per cent after it finalised a €5 billion loan from the French government and Goldman Sachs upgraded its stock to “buy”. Shares in Infineon Technologies, AMS and ASM International rose between 3.8 per cent and 7.3 per cent after US chipmaker Microchip raised its earnings forecast.

Lufthansa gained 7.7 per cent as it vowed to step up restructuring measures after posting a first-quarter net loss of €2.1 billion.

A jump in Boeing shares lifted Wall Street, with investors remaining upbeat about an economic rebound from a coronavirus-led slump, despite continuing social and political unrest.

Boeing rose 10 per cent after billionaire investor Daniel Loeb’s Third Point said it took a stake in the planemaker. Microchip Technology surged 11 per cent after the chipmaker raised its forecast for current-quarter sales and profit as it begins making up for lost production due to the pandemic.

Coty added 6.3 per cent after the cosmetics maker said it was in talks with reality TV star Kim Kardashian West on a possible collaboration for a beauty line. – Additional reporting: Reuters.

1 If international visitors are pariahs should we not be testing them on arrival?
2 Varadkar to meet banks in row over interest on mortgage payment breaks
3 ‘My rent here is so low it’s a joke’
4 Can Grafton Street stop the flood of closures?
5 Belgium helps Ireland to a Brexit boon
6 WeWork on track for profits and positive cash flow in 2021, says chairman
7 This charming man: how Paschal Donohoe won the Eurogroup presidency
8 Goodbody’s planned €155m sale to Bank of China falls through
9 Legal tech start-up aims to make DIY divorces easier and cheaper
10 How to save money while helping to save the planet
Real news has value SUBSCRIBE