Travel and financial stocks among those to make gains 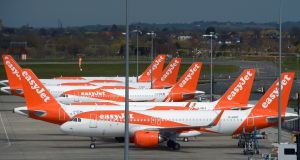 Easyjet was among the travel stocks to rise on equity markets on Wednesday. Photograph: Nick Ansell/PA

The global rally in stocks held its momentum on Wednesday as investors clung to optimism for a quick economic recovery from the coronavirus pandemic.

In the US, the Dow Jones and the S&P 500 opened higher, while the Nasdaq 100 rose within 1 per cent of an all-time high.

US equity futures also rose, while the euro climbed for a seventh session as data showed economic activity in the 19-nation common-currency region increased in May to highest in three months after an easing of lockdown restrictions.

In Asia, South Korean shares advanced the most after the country detailed a third round of fiscal stimulus,while Singapore’s benchmark entered a bull market. Brent crude oil extended its rebound above $40 as investors eyed a potential extension of production curbs.

Stocks have advanced globally for eight days to their highest level versus estimated earnings since the early 2000s, as more businesses reopen around the world and manufacturing gauges show economies stabilising following shutdowns.

A slew of risks remain, however, including tense US-China relations that may jeopardise a hard-won trade deal. “If I look at the markets, I see a V-shaped recovery,” Mark Mobius, co-founder at Mobius Capital Partners, said on Bloomberg TV.

“What we’re hearing from companies around the world is that once the lockdown is over, they’re going to get the customers coming back in droves.” – Bloomberg