UK grocer Morrison drags retailers lower, but there are gains for Lufthansa and INM 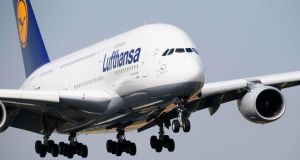 
European stocks fell to a five-week low, after a slump in UK grocery chain Morrison lead retailers lower and concern grew over the standoff between Russia and Ukraine. Brokers predicted that volatility and selling pressure would continue into the weekend as investors await the outcome of a vote in Crimea.

Uncertainty about the outcome of the referendum, as well as the threat of sanctions and military interventions, have weighed on markets, deterring investors from taking big positions on equities.

US commerce data showed that sales at US retailers climbed 0.3 per cent in February, the first increase in three months, after a revised 0.6 per cent drop in January.


DUBLIN
The Iseq index slipped 0.6 per cent, as major stocks including CRH, Bank of Ireland and paper and packaging group Smurfit Kappa all declined on weaker investor sentiment. The latter stock was one of the heaviest fallers, closing down 3.85 per cent at €18.86.

Independent News & Media advanced 15.5 per cent to 17 cent, after investors decided its full-year results for 2013 were encouraging. Analysts noted that the reduction in the company’s net debt came in ahead of expectations and that the company was on the cusp of new earnings momentum.

Ryanair nudged down 0.6 per cent to finish at €7.22, on a day when well-received earnings data from Deutsche Lufthansa boosted the airline sector. Glanbia rose 1.9 per cent to €11.42, a day after its full-year numbers were also viewed positively by investors.


LONDON
UK stocks declined to their lowest level in a month as supermarket chain Morrison saw its shares tumble, after forecasting that profit will decline for a third consecutive year. The FTSE 100 index of blue-chip shares closed down 1 per cent.

Morrison plummeted 12 per cent to 205.2 pence, after also saying it would sell properties valued at £1 billion.This was the biggest slide in 11 years for the smallest of the UK’s four main grocers and the move led other grocery stocks lower during the trading session. Tesco , the UK’s largest supermarket chain, lost 5 per cent to 298.8 pence and Sainsbury ’s sank 8.5 per cent to 304.9 pence.

Home Retail Group advanced to its highest price since May 2011, rallying 5 per cent to 215.4 pence, after the owner of the Argos chain predicted its full-year profit would exceed analysts’ projections. Barclays climbed 0.8 per cent to 235.7 pence after analysts at Numis Securities upgraded the bank.


EUROPE
National benchmark indexes retreated in all of the 18 western-European markets, with France’s Cac 40 falling 1.3 per cent and Germany’s Dax declining 1.9 per cent.

Adecco , the world’s largest provider of temporary workers, fell 6.6 per cent to 73.40 Swiss francs, after Jacobs Holding, its largest investor, sold a stake of about 16 per cent.

Deutsche Lufthansa rallied 3.9 per cent to €18.61 after it resumed dividend payments and maintained a target of tripling operating profit within two years. Europe’s second-largest airline said it will pay a dividend of 45 euro cents a share.

K+S dropped 9.9 per cent, the most since July, to €22.10. Europe’s largest potash supplier forecast a “significant” drop in earnings this year as prices for the crop nutrient and some crystallized salts remain lower.


US
Stocks in the US fell, briefly erasing this year’s gains for the Standard and Poor’s 500 Index, as weaker-than-forecast data from China and tension in Ukraine overshadowed reports showing an improving American economy.

Luxury group PVH , which owns Calvin Klein, declined 4.5 per cent to $116.54. The company was downgraded by analysts at Wells Fargo and Morgan Stanley. Amazon.com climbed 0.5 per cent to $372.29. The world’s largest internet retailer boosted the price of its Prime membership by 25 per cent to $99 a year. (Additional reporting: Bloomberg)