Dalata hotel group falls sharply in Dublin, with its price down by 2.9 per cent to €5.02 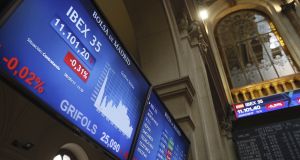 A raft of well-received updates and a recovery in resources stocks helped European shares rebound from the previous session’s slight losses, ending at fresh 21-month highs.

A number of large sellers in the market were offloading shares in hotel company, Dalata, driving its price down by 2.9 per cent to €5.02. It was down by well over 3 per cent at one stage in the late afternoon. Almost €25 million worth of the company’s shares were traded in a relatively small number of deals.

Bank of Ireland, which is on the hunt for a new chief executive, was down 2.3 per cent. There was speculation linking the outgoing chief financial officer of Dutch group ING with the role.

Despite a wider recovery in resource stocks in Europe, several of the smaller ones listed in Dublin were down. Micon and Petroneft were both down 3.85 pere cent, while Providence Resources fell 5 per cent.

Micro Focus slumped 5.6 per cent after saying that revenue at Hewlett-Packard Enterprise, the US company it is buying, dropped about 10 per cent in the last quarter.

Micro Focus announced in September last year that it would buy the software arm in an $8.8 billion deal.

British utility Centrica came under pressure after UK prime minister Theresa May pledged to cap energy prices if she is re-elected in June’s general election. Centrica’s shares fell 1.2 per cent, while SSE was also one of the biggest fallers, dropping 18p to 1,431p,

Henderson’s shares gained 2.3 per cent after UBS upgraded the asset management firm to “buy” from “neutral”, citing its planned merger with US fund firm Janus Capital.

More than halfway into the first-quarter results season, earnings for European firms have been strong overall, with major euro zone blue chip firms seeing average earnings growth of about 20 per cent, according to Thomson Reuters data.

In that vein, company results were in focus, with shares in Italy’s David Campari jumping 4.4 per cent after the spirits maker reported first-quarter earnings boosted by high-margin brands.

Elsewhere a rebound in basic resources stocks and gains among energy firms also helped support the market, with miners up after a rise in the underlying price of copper.

Shares in Belgian materials group Umicore rose 3.3 per cent, supported by a positive broker note from Berenberg whose analysts also upped their target price for the stock.

Shares in jewellery maker Pandora gave up early gains to end down 6.6 per cent lower after its update, while Apple supplier Dialog Semiconductor retreated 0.2 per cent with analysts pointing to the chipmaker’s weaker guidance for the second quarter in which it expects to see a dip in revenues.

US technology stocks rose to fresh records, while the dollar gained with US Treasury yields as bets increased for a hike in US borrowing costs next month, damping a rebound in commodities.

Five of the 11 major S&P sectors were higher, while the typically defensive plays such as utilities and telecom services fell.

Shares of Valeant Pharmaceuticals jumped more than 16 per cent after the company posted its first profit in six quarters.