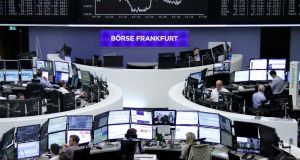 Germany’s DAX Index was in focus as the benchmark dropped 0.4 per cent, weighed down by EON and exporters such as ThyssenKrupp and Bayer as the euro strengthened. Photograph: Reuters

The Stoxx Europe 600 Index – a gauge of the wider European market – slipped 0.2 per cent at the close, trimming a decline of as much as 0.4 per cent. Trading was volatile, with the volume of shares changing hands about a third lower than the 30-day average.

Kerry lost 1.3 per cent to €77 as Danish biotech group Novozymes, whose food and beverages division competes with the Irish company’s taste and nutrition division, issued a disappointing set of first-half sales and earnings figures.

However, FBD managed to edge 0.4 per cent higher to €6.12, with Goodbody Stockbrokers analyst Eamonn Hughes saying in a note ahead of the group’s interim results on Friday that the insurer’s net asset value may be “approaching stabilisation”. He sees the company’s net loss narrowing to €10.3 million for the first half from €84.4 million for the year-earlier period.

The FTSE 100 Index added 0.2 per cent at the close. The benchmark has climbed 3.5 per cent in five sessions, boosted by Bank of England stimulus measures aimed at limiting the fallout from the UK’s vote to leave the European Union, and stronger- than-forecast US payrolls.

Entertainment One rallied 10 per cent after the owner of the “Peppa Pig” cartoon character said it rejected a takeover offer by ITV and suggested it is seeking a higher price.

G4S jumped 16 per cent after the security-services provider posted a revenue increase and said it sees no significant impact from the UK’s vote to leave the EU. Prudential climbed 2.2 per cent after the life insurance and financial services group profit beat analyst forecasts.

Germany’s DAX Index, which entered a bull market on Tuesday, was in focus in Europe as the benchmark dropped 0.4 per cent, weighed down by EON and exporters such as ThyssenKrupp and Bayer as the euro strengthened.

EON sank 6.9 per cent, the most since June, as it reported a first-half loss, triggering a slide in the industry.

Novozymes sank 12 per cent in Copenhagen, pushing pharmaceutical companies to the biggest drop among sectors, as it reported profit that missed estimates and cut its sales outlook.

Royal Dutch Shell and Tullow Oil dragged down energy companies as oil declined, while steelmakers including ArcelorMittal and Voestalpine fell more than 2 per cent.

“The earnings season hasn’t been spectacular, the oil price has gyrated again,” said Ben Kumar, an investment manager at Seven Investment Management in London. “It’s enough, if you’ve made money, to go back to sit on the sidelines and not quite enough to get you back into the market yet. It’s not been a particularly loved rally.”

Among other stocks moving on earnings news, Belgium’s Ageas climbed 5 per cent after posting insurance profit that topped projections.

US stock indexes retreated from record levels in mid-afternoon trade there as a drop in oil prices pressured energy stocks.

Oil prices fell 1.6 per cent in choppy trading after the US government reported a surprise crude stockpile build.

By mid-afternoon, the Dow Jones Industrial Average was down 0.16 per cent, the S&P was off 0.23 per cent, and the Nasdaq Composite was 0.39 per cent lower.

Shares of Walt Disney rose 2.2 per cent after the company reported results and bought a 33 per cent stake in video-streaming firm BAMTech.

Solar panel company SunPower shares sank 30 per cent after the company swung to a second-quarter loss, lowered its full-year revenue forecast and said it would reorganise its business.

Perrigo dropped 11 per cent to after the company reported a lower-than-expected profit and slashed its earnings forecast. – (Additional reporting: Bloomberg/Reuters)