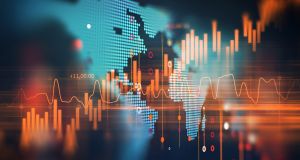 European shares paused on Tuesday as investors sought to guess the bond market’s next move, while weak German retail sales were a stark reminder of continued Covid-19 fallout on the region’s biggest economy.

Overnight falls in Asian stockmarkets, after a senior Chinese official expressed wariness about the risk of asset bubbles in foreign markets, and a drop in oil prices also weighed on sentiment, but the dollar was steady, along with US Treasuries.

Analysts said a pause was to be expected after European shares had marked their best day in nearly four months on Monday when bond markets stabilised from a sharp selloff last week.

“We are in the yield waiting room to see whether central bankers push back this week on the ambivalence we saw last week about interest rates,” said Michael Hewson, chief market analyst at CMC Markets.

“Potentially that was a mistake, giving the impression that the US did not really care about sharp rises in yields and sending the wrong message.”

The pan-European Stoxx 600 share index edged 0.2 per cent higher, with Paris down, while Frankfurt and London eked out slim gains. The Dublin market was marginally higher, gaining 0.58 per cent.

Investors will scrutinise speeches from US Federal Reserve officials, starting with Lael Brainard at 1800 GMT on Tuesday, for any tweaks to messages on bond yields.

Among the day’s economic data, German retail sales tumbled more than expected in January as an ongoing lockdown to fight the coronavirus pandemic curtailed retail spending.

US stock futures were weaker .

Shares in mainland China and Hong Kong fell after a top regulatory official expressed concerns about the risk of bubbles bursting in foreign markets.

“Financial markets are trading at high levels in Europe, the U.S. and other developed countries, which runs counter to the real economy,” Guo Shuqing, head of the China Banking and Insurance Regulatory Commission, told a news conference.

MSCI’s broadest index of Asia-Pacific shares outside Japan slipped 0.33 per cent. Japan’s Nikkei was down 0.8 per cent as some investors booked profits on defensive energy and utility shares before the end of the fiscal year this month.

US stocks rallied overnight, with the S&P 500 posting its best day in nearly nine months, as bond markets calmed after a month-long selloff.

US stocks were roiled last week when a selloff in Treasuries pushed the 10-year Treasury yield to a one-year high of 1.614 per cent. The 10-year yield was flat at 1.4308 per cent.