European shares advance but US futures drift with Asian stocks 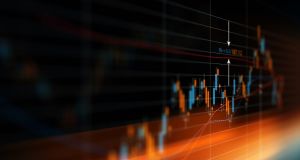 European shares advanced and US equity futures drifted with Asian stocks as investors hit pause on a selloff triggered by worries over growing threats to global trade.

Treasuries edged lower for the first time in four sessions and most European bonds fell. Miners and utility companies led the gains as the Stoxx Europe 600 Index climbed.

The tense atmosphere lifted demand for safe-haven US Treasuries and kept the dollar on the defensive as financial markets worried about the wider global economic fallout of the Trump administration’s “America First” agenda.

In Asia, Japanese shares reversed earlier losses to finish slightly higher, while Chinese equities entered a bear market on concern about the country’s ability to fight a trade war.

Analysts expect losses to deepen as concern over China’s economy, yuan weakness and a trade feud with the US continue to rattle investors. The Shanghai Composite Index closed at 2,844.51 points, 20 per cent below a January high, denoting a bear market.

Tech-heavy indexes such as South Korea’s KOSPI and Taiwan’s weighted index fell 0.45 per cent and 0.55 per cent, respectively.

Asian tech shares slid after US peers, which derive much of their sales revenue from China, took a battering overnight.

Sparking the drop in tech shares and souring broader sentiment was a report on Monday that the US Treasury Department was drafting curbs that would block companies with at least 25 per cent Chinese ownership from investing in US tech firms.

“Unlike the seemingly spur-of-the-moment tweets by President Trump and the retaliatory exchange of tariffs, Washington’s bid to protect intellectual property is an issue at the heart of a trade row between two powers battling for future global supremacy,” wrote Yoshimasa Maruyama, chief market economist at SMBC Nikko Securities in Tokyo.

Besides the trade dispute with China, the United States has recently raised the stakes in a challenge to the European Union by threatening tariffs on cars imported from the bloc.

“It’s turning out to be a long-term bearish factor for the financial markets, as the United States is unlikely to back down at least through its midterm elections (in November).”

The dollar index against a basket of six major currencies dipped 0.1 percent to 94.202 and was headed for its fifth straight day of losses.

The greenback was pressured as long-term U.S. Treasury yields declined to one-week lows as prices rose on heightened risk aversion in financial markets.

The euro added to the previous day’s gains and reached a near two-week high of $1.1722.

The dollar was down 0.3 per cent at 109.460 yen, having fallen to a two-week low of 109.365 on Monday. The yen often attracts safe-haven bids in times of political tension and market turmoil.

Brent crude oil futures were up 0.15 per cent at $74.83 on uncertainty over Libya’s capacity to deliver on exports commitments. Brent futures had fallen 1 percent overnight as receding investor risk appetite weighed on commodities.

Oil prices were capped after Opec and its allies on Friday agreed to increase global supplies, albeit modestly.