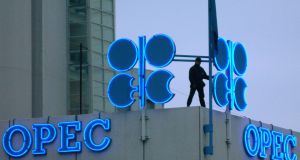 Better-than-expected euro zone economic data and energy stocks galvanised by an Opec agreement on a modest increase in oil production helped drive a bounce in European shares at the end of a tumultuous week marred by trade war worries.

In the US, the Opec agreement boosted Wall Street although a drop in technology stocks capped gains.

Troubled food group Aryzta was the top performer on Ireland’s benchmark Iseq overall index on Friday, which closed up 0.62 per cent. The company bounced off lows, ending 7.92 per cent higher at €1.05.

Budget airline Ryanair ended slightly higher despite being weak for most of the day. The airline had suffered slightly on the back of air traffic control strike concerns in France but ultimately closed up 0.33 per cent at €16.60.

On the property front there was significant volume traded in both Cairn Homes and Hibernia Reit on the last day of the trading week. Cairn closed up 1.14 per cent at €1.77 while Hibernia advanced 0.91 per cent to €1.554.

The FTSE 100 ended the day up 1.7 per cent, a rise which allowed it to finish on a weekly gain of 0.6 per cent and avoid a fifth straight week of losses.

Lenders also provided a lift to the index on Friday with domestically exposed banks Royal Bank of Scotland and Lloyds, which would benefit from tighter monetary policy, rising 1.8 and 1.2 per cent respectively.

Materials stocks were up as copper prices ticked higher although they were poised for a second week of decline on fears that a trade conflict between the United States and China would hit demand.

Elsewhere, online clothing retailer Asos fell 5.6 per cent on worries that a US internet tax ruling could hit its local earnings.

The pan-European Stoxx 600 ended the day up 1.1 per cent but recorded a 1.1 per cent fall on the week as fears of rising global protectionism sank in, particularly for the autos sector.

Shares in European carmakers and Germany’s Dax briefly tanked in afternoon trading after president Donald Trump threatened a 20 per cent tariff on car imports from the EU.

German carmakers Daimler, Volkswagen and BMW, which are heavily reliant on US car sales, ended the day down 0.3 per cent, 1.1 per cent and 0.2 per cent respectively.

France’s Total and Royal Dutch Shell both added 3.3 per cent.

Banks drove the lion’s share of gains after the 35 largest US banks cleared the first stage of the Federal Reserve’s annual stress test. The European banks index climbed 1.3 per cent with Italian lenders leading the gainers. BPER Banca jumped 4.7 per cent after Unipol raised its stake in the Italian regional lender.

Harley-Davidson fell 1.7 per cent. The US bike maker has in the past warned of a “significant impact” on its sales if the European Union decides to increase duties on motorcycles in retaliation.

The benchmark Brent crude following three days of declines after OPEC agreed on Friday to a modest increase in output to compensate for losses in production at a time of rising global demand. Exxon Mobil rose 2.5 per cent and Chevron gained, lending the biggest boost to the S&P 500 and the Dow.

The technology sector was the only one in the red. Leading the decliners among tech was open source software provider Red Hat, which slumped after its current-quarter and full-year revenue missed analysts’ estimates due to a strengthening dollar. Microsoft’s decline and Facebook’s fall also weighed.

1 The wealth of the Irish – how do your assets match up?
2 KBC Ireland fined €18.3m for ‘unconscionable’ tracker scandal role
3 Will Facebook walk away from European market after data protection 'hissy fit'?
4 Dunnes Stores set to enter grocery delivery market
5 Irish company to test vaccines on volunteers deliberately infected with Covid-19
6 Air travel never going ‘back to way it was’
7 Dublin and Cork airports look at setting up pre-flight Covid testing centres
8 Should I switch bank now with Ulster Bank at risk of closing?
9 Willie Walsh joins CarTrawler as deputy chairman
10 State calls for applications to €500m disruptive technologies fund
Real news has value SUBSCRIBE