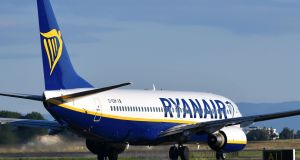 Ryanair was one of the heavyweights lifting the Irish stock market on Friday, with its shares jumping 5.1%. Photograph: Getty Images

The Iseq was ahead by almost 2.4 per cent by the end of the session as its heavyweight stocks lifted the index into the black.

Ryanair rose 5.1 per cent to close at €17.06 per share as the airline signalled its intention to expand heavily with the extra purchase of more Boeing aircraft. The airline is positioning itself to benefit from an expected upturn in international travel once Covid-19 vaccines kick in.

There were contrasting fortunes for Irish banks as AIB finished ahead 3.5 per cent to €1.75 per share, while Bank of Ireland fell 2 per cent to €3 per share.

Forecourts retailer Applegreen looked set to benefit from the easing of lockdown restrictions in Ireland and the UK by climbing 7 per cent to €3.94.

London’s FTSE 100 rose to a nine-month high as a jump in oil prices boosted energy stocks. Investors remained focussed on Brexit trade talks with only four weeks left for Britain’s transition period out of the bloc to end.

The mid-cap FTSE 250, considered a barometer of Brexit sentiment, rose 0.3 per cent led by the property, technology and consumer staples sectors.

McBride jumped 7.3 per cent after raising its full-year earnings outlook, while housebuilder Berkeley Group shed 1.8 per cent as it posted a fall in first-half profit.

Energy supplier SSE made gains after it lifted its profit targets on the back of sealing a deal to sell its 10 per cent stake in the world’s biggest wind farm project. It closed 25.5p higher at 1,386.5p after it confirmed the £202.5 million sale of its share of the Dogger Bank Wind Farm off the east Yorkshire coast to Italian energy giant Eni.

Cineworld sank after investors digested Warner Bros’s decision to release all of its 2021 releases – including blockbusters such as Dune, Matrix 4 and The Suicide Squad – on its HBO Max streaming service at the same time as in cinemas. Shares in the chain closed 10.94p lower at 62.02p as Cineworld responded, saying cinemas are “the best place to watch a movie”.

Germany’s DAX climbed 0.4 per cent, but ended 0.3 per cent lower on the week, having underperformed peers for most of the week. The index has risen about 60 per cent from its March lows compared with nearly a 46 per cent rise for the Stoxx 600 over the same period.

Data on Friday showed German industrial orders rose more than expected on the month in October, raising hopes the manufacturing sector in Europe’s biggest economy started the fourth quarter on a solid footing. Basic material stocks rose 1.4 per cent and were the biggest gainers this week, up 6.8 per cent in its best weekly performance in six months, as copper and iron ore prices soared.

Sweden’s Investment Latour dropped 12.7 per cent and was the worst performer on the Stoxx 600 after its majority shareholder trimmed its stake in the company.

US stocks climbed to all-time highs and treasury yields jumped after a report showing US employment gains slowed in November bolstered expectations for more federal stimulus. The S&P 500 rose to a record for the third time in four days, led by the energy, materials and real estate sectors.

The Dow Jones Industrial Average and Nasdaq Composite also set all-time intraday highs. The dollar headed for its biggest weekly decline in five, while the yield on the 10-year treasury note reached the highest in nine months.

Oil climbed as OPEC+ reached an agreement to ease its output cuts next year more gradually than previously planned.