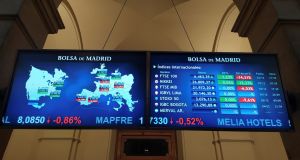 London FTSE 100 rose 0.8 per cent as crude prices gained after a compromise between OPEC+ members to continue some production cuts. Europe’s oil and gas index jumped 1.7 per cent overnight, the Nasdaq hit all-time highs after a bipartisan, $908 billion coronavirus aid plan gained momentum in the US Congress, spurring an optimism that also helped the broader Asian market. “It’s a mixture of both stimulus and the vaccine news both moving in the right direction,” said David Madden, market analyst at CMC Markets UK. “Things are far from resolved but traders are looking beyond yesterday’s health stats and looking to tomorrow’s vaccine or stimulus package news.”

The pan-European Stoxx 600 index rose 0.2 per cent, but looked set to end the week lower, ending a four-week winning streak, as disappointing economic data and Brexit uncertainty had weighed.

On Friday, London indicated that the chance of a breakthrough regarding a post-Brexit trade deal was receding. A British minister said talks are in the difficult phase and a deal can only be struck if the European Union accepts that Britain is a sovereign nation. But analysts were hopeful of an eventual deal. “As long as a basic deal is struck that avoids a no-deal scenario, that would help sentiment,” Mr Madden said.

German shares, meanwhile, traded flat. The Dax has made up about 60 per cent from its March lows compared with an near 46 per cent rise for the Stoxx 600 over the same period. Data on Friday showed German industrial orders rose more than expected on the month in October, raising hopes the manufacturing sector in Europe’s biggest economy started the fourth quarter on a solid footing.

Shares of Germany’s BioNtech slid 3.2 per cent after Covid-19 vaccine partner Pfizer said supply chain obstacles forced it to slash the 2020 production target of the vaccine by half. Shares of UK homebuilder Berkeley lost 2.8 per cent after it reported a 16.6 per cent fall in first-half profit as home sales were dented by the pandemic. - Reuters