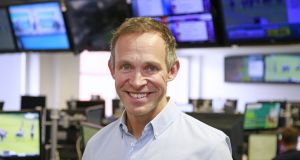 Global markets were largely unmoved on Friday, but there were some signs of optimism on the back of news that US president Donald Trump will leave the White House if the electoral college affirms democrat Joe Biden’s win.

“There was considerable flow on the back of that,” noted one trader. It finished the day down 1.5 per cent with about 4 million shares traded.

Ryanair was unchanged, but some of its peers lost ground. Among them was Aer Lingus parent International Airlines Group, which traded down 2 per cent.

In building and construction, CRH was down 1.5 per cent, Cairn Homes was up 2.3 per cent, while Glenveagh Properties was up 1.7 per cent on the back of news about new developments.

Elsewhere, C&C was down 2 per cent. “It has been having a very good run of late so it may have just been giving back some of those gains,” said a trader.

Domestically oriented British mid-cap stocks rose, but marked their first weekly loss this month as frictions in the Brexit process and a gloomy economic outlook due to coronavirus weighed on sentiment.

European shares gained for a fourth straight week as investors looked past near-term virus damage and hoped for a quicker economic revival next year, while Spanish lender BBVA gained after ending merger talks with Banco Sabadell.

The pan-European Stoxx 600 ended 0.4 per cent higher and added 0.93 per cent for the week, with tech and banks leading gains, while energy stocks were the top gainers for the week on rising oil prices.

BBVA gained 4.2 per cent and was among the top gainers on the benchmark index. Banco Sabadell shares fell 13 per cent, as the merger failure is expected to add pressure on the lender, which was seen as the weaker link in the potential transaction.

The two banks had looked for a deal to create Spain’s second-biggest domestic bank.

France’s benchmark CAC 40 index gained 0.8 per cent as the country reported another drop in infections and hospitalisations.

British drugmaker AstraZeneca reversed losses to rise 0.3 per cent as Britain and other countries pressed for a possible rollout even as experts raised questions about the results of its late-stage vaccine study.

Wall Street’s main indexes rose and the tech-heavy Nasdaq hit a record high as optimism around an economic rebound next year outweighed fears of an expected surge in coronavirus infections following the Thanksgiving holiday.

Five of the 11 major S&P indexes were up by mid-morning, with information technology jumping 0.8 per cent on demand for stay-at-home winners Apple, Microsoft and Nvidia.

Hopes of more stimulus, signs of progress in developing Covid-19 vaccines and encouraging economic data have lifted the three main US stock indexes by more than 10 per cent this month and set the S&P 500 on course for its best November ever.