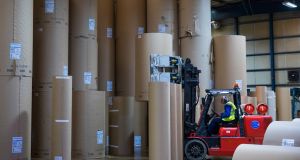 Smurft Kappa has had a good Covid-19 crisis.

It was a tale of two Covids as Greencore and Smurfit Kappa each turned to the equity markets in the past 10 days to load up on cash.

Smurfit Kappa came out after European markets closed on Thursday last week to raise €660 million – taking advantage as its stock traded around highs last seen 2½ years ago when the cardboard box-maker was being stalked by unwanted suitor in the shape of US peer International Paper.

Smurfit Kappa may have reported earlier in this month that its third-quarter earnings had dipped almost 5 per cent as Covid-19 hit a part of its business that’s exposed to the likes of cafes and restaurants. But the pandemic has served to turbo charge two large trends that were already playing into the company’s hands in recent years: a surge in ecommerce and a shift across the consumer goods industry towards sustainable packaging.

(Happily for Smurfit Kappa, the crisis has also has pushed environmental, social and governance (ESG) investing up a notch or two on investors’ agendas.)

The fresh equity will be used to invest in projects aimed at taking advantage of the two themes that group chief executive, Tony Smurfit, has said are set to turn into “very large” financial results for the company in the future. “We have more opportunities than we know what to do with,” he said at the time of the results. Can Smurfit Kappa deliver on the promise?

On the other hand, a move by Dublin-based Greencore – which left the Irish stock market in 2012 for sole trading of its shares in London – earlier this week to raise £90 million (€101m) in a share sale was more of a defensive move.

The UK’s largest maker of prepacked sandwiches saw its food-to-go business decimated almost overnight earlier this year as urban office workers fled with their laptops and whatever else they could carry to work from home.

But these did little to cushion the blow of an 81 per cent profit slump in the year to September.

The equity raise underpins Greencore’s balance sheet and buys it time amid concerns that we could see further waves of infection and government restrictions before a widespread roll-out of vaccines. But Coveney has little hope of the UK’s food market recovering to 2019 levels until 2022 at the earliest.

With investors left questioning who will be nipping into the likes of Marks & Spencer, Sainsbury’s or Tesco city-centre stores at lunchtime for one of Greencore’s ham and cheese specials or sushi packs by then, shares in the company are down by two-thirds so far this year.

Still, investors should take some comfort from the fact that the CEO stumped up £400,000 of his own money to take part in the equity raise.

Both the Greencore and Smurfit Kappa share placings have been part of a last-minute flurry of by companies with primary UK listings taking advantage of relaxed rules for stock placings resulting from the Covid-19 crisis.

Ordinarily companies have to offer existing investors first refusal on new stock if they plan on issuing more than the 5-10 per cent of outstanding shares approved as standard at annual general meetings.

However, the UK Financial Conduct Authority raised the threshold to 20 per cent in April to allow businesses rush to market without the usual messy business of having to pull together prospectuses and hold extraordinary shareholder meetings.

These guidelines are set to run out next week.

Most have been pitched to date as opportunities for the companies to get an advantage over industry rivals. But as we get closer to companies reporting full-year results early next year and having potentially uncomfortable going-concern conversations with auditors, we may see more raising funds to repair balance sheets rather than get ahead.

Work on the planned €318 million takeover of staffing firm CPL Resources by Japanese group Outsourcing has been coming along nicely since it was announced earlier this month.

Documents published this week show that an extraordinary general meeting of investors on the matter will take place on December 18th.

A High Court date to rubber-stamp the deal has been set for January 30th, and, all going well, cheques will be posted out to shareholders by the end of April at the latest.

The payday, of course, will be most welcomed by group chief executive and co-founder Anne Heraty and her husband and fellow director Paul Carroll, who are poised to receive almost €110 million for their combined 34.9 per cent stake in the business.

The latest filings also show that CPL entered a new service agreement with Heraty just days before the takeover was announced – with “enhanced non-compete and non-solicitation covenants in favour of CPL and increased notice periods on termination”. A company spokeswoman declined to comment on the details.

There have been no signs that Heraty has any intention of leaving CPL any time soon. But it’s clear that the Japanese recruiter wants to make sure it has a good hold on its new star signing.