Stocks up ahead of earnings season 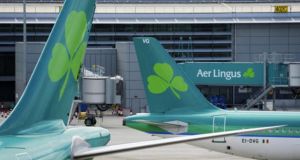 Stocks rose in the US and Europe as investors awaited the start of second-quarter earnings season and the conclusion of a meeting of euro-area finance ministers to discuss aid for Greece.

Shares were also boosted by strong US jobs data at the end of last week, which reassured investors the US economy was still strengthening.

DUBLIN
While there was a decent advance in markets across Europe yesterday, Dublin’s Iseq index slightly underperformed, finishing the day just 0.5 per cent higher at 4,022.

Volumes were light across the board according to one Dublin stockbroker, who said it was an uneventful day despite “ongoing chatter” between Aer Lingus and Ryanair which impacted their shares.

It was a bad day for companies in the exploration sector though, with Kenmare Resources, Dragon Oil and Providence Resources all falling more than 1.5 per cent.

RBS rose 4.4 per cent to lead gains in the FTSE after reports that minority shareholders will be able to block a government plan to split it into a good and a bad bank, the latter of which would likely need to be recapitalised after the break-up.

ITV was 2.2 per cent higher amid speculation it is weighing up a £90 million bid for Helsinki-based production house Nice Entertainment Group, which would add to the group’s stable of original content and further reduce its reliance on volatile advertising markets.

EUROPE
European stocks rose, rebounding from their biggest decline in almost two weeks, amid speculation that economic data will improve and as Portugal’s politicians reached an agreement to hold the governing coalition together.

Novartis climbed 1.3 per cent after saying a psoriasis treatment met all its objectives in a clinical study.

Intel was the S&P 500’s worst performer sliding 3.9 per cent to $23.12 after analysts at Evercore Partners downgraded the company’s stock.

In the biotech sector, Cytokinetics shares fell 1.1 per cent to $12.67 after the company disclosed a programming error in a study of its treatment for amyotrophic lateral sclerosis. – (Additional reporting: Bloomberg, Reuters)