BofI, which will be one of the ECB’s stress test victims, outperformed its European sector 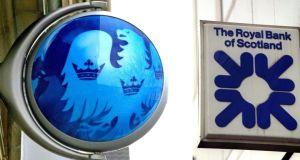 Royal Bank of Scotland and Barclays declined at least 1.5 per cent each. Photograph: PA Wire

Stock markets paused for breath yesterday, with stocks led down by weakness in the banking sector as detail emerged of stress tests to be led by the European Central Bank. There was also some talk across markets of the merits of removing some “froth” after recent strong runs.

DUBLIN
The Dublin market shed 0.5 per cent, with a 1.82 per cent drop in CRH acting as a strong negative. Shares in the building materials group closed at €17.834, 33.1 cent weaker.

Bank of Ireland was quite busy in the wake of news that it had reached a deal, subject to staff approval, to cut its pension deficit. The bank, which will be one of the ECB’s stress test victims, ultimately outperformed its European sector as it closed 0.76 per cent lower at 26.3 cent,

Kenmare Resources improved slightly after indicating that a fire at its Mozambique mine had not caused structural damage. Shares in the explorer gained 0.3 cent to finish at 26.2 cent. Other positive performers included Smurfit Kappa, which was up 6 cent at €18.05, and Paddy Power, which rose 30 cent to €57.50. Among weaker stocks was Independent News & Media, which broke a period of strong performance by declining 1.8 cent to 10.2 cent.

LONDON
UK stocks dropped from their highest level since May, following a nine-day winning streak, as banks followed European peers lower and investors speculated shares will halt their rally.

Royal Bank of Scotland and Barclays declined at least 1.5 per cent each. GlaxoSmithKline fell 1.9 per cent after saying sales in China slumped amid a probe into bribery allegations.

De La Rue slumped to an 18-month low after the bank-note printer said it will miss its profit target for the financial year.

Premier Oil fell the most in five months after the explorer lowered its production forecast. The FTSE 100 Index slid 21.18 points, or 0.3 per cent, to 6,674.48 at the close of trading in London. The gauge gained 5.6 per cent in the nine days until yesterday as companies from BHP Billiton to British Sky Broadcasting posted results that beat estimates and investors bet the Federal Reserve will maintain stimulus.

Orange retreated the most in more than two years as France’s largest telecommunications company also posted earnings that dropped in the third quarter.

The Stoxx Europe 600 Index retreated 0.7 per cent to 318.61 as London markets closed. The equity benchmark has still gained 2.6 per cent so far this month as US lawmakers agreed to extend the government’s borrowing authority until 2014.

Bankinter and Banco Popular Espanol retreated 4.8 per cent to €4.33 and 2.5 per cent to €4.06, respectively, as a gauge of lenders posted the biggest decline on the Stoxx 600.

NEW YORK
US stocks declined, with the S&P’s 500 Index falling from a record, as valuations reached an almost four-year high and forecasts at companies from Caterpillar to Broadcom disappointed investors.

Caterpillar dropped 6 per cent after reducing its 2013 revenue and profit forecast as slumping metal demand decreases orders from mining companies.

Broadcom, a maker of chips that connect mobile devices to the Internet, tumbled 4.6 per cent. Corning jumped 11 per cent after approving a $2 billion buyback and agreeing to purchase full ownership of a Samsung Electronics joint venture. – (Additional reporting, Bloomberg)