Positive mood after news from Fed 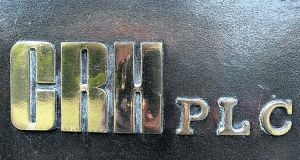 European markets were all in solid form yesterday, reacting to overnight gains in the US and Asia. The driver for all the positivity was news from the Federal Reserve on Wednesday evening that it was not about to ease off on its monthly stimulus programme.

The trend shifted a touch as the day progressed and as US markets opened, but most European indexes ended with gains.

Domestically, news of the economy’s tentative move out of recession in the second quarter helped to underpin stocks.

DUBLIN
The Irish market went along with the general trend, closing 0.5 per cent stronger on generally healthy volume. CRH helped to drive the positive move, moving along with its sector, as it rose by 40 cent or 2.26 per cent to €18.125 .

Ryanair was an underperformer in advance of today’s agm, at which the airline is expected to reveal details of its new website. Shares dropped by 11.3 cent to €6.297.

Smurfit Kappa, which held an investor day in New York on Wednesday, also declined, shedding 23 cent before settling at €16.80.

Bank of Ireland, seen as a proxy play for the Irish economy, added 0.4 cent to end the session at 22.1 cent. The bank was also boosted by news that it will be added to the S&P Europe 350, S&P Euro Plus and S&P Euro indices from next Wednesday.

C&C ended in positive territory, rising by 1.2 cent to €4.262 cent. The move came despite poor cider sales data that emerged from the US.

LONDON
The FTSE 100 climbed yesterday, with the Fed’s decision boosting investors’ appetite for risk-sensitive sectors such as miners. The blue chip British stock index closed up 66.57 points or 1 per cent.

The mining sector gained 2.2 per cent, led higher by precious metal miners. Randgold Resources and Fresnillo were among top gainers, up 8.1 per cent and 6.1 per cent respectively, benefiting as gold traded near a one-week high.

Gold is seen as an inflation hedge, and had suffered as expectations grew that the Fed would begin to wind down its stimulus package.

EUROPE
European stocks rose to the highest level in more than five years on the Fed move (or lack thereof). The Stoxx Europe 600 index gained 0.5 per cent to 314.81, the highest level since June 2008, as the London market closed, after earlier rising as much as 1.2 per cent.

The equity benchmark has risen 5.9 per cent so far this month, extending its advance this year to 13 per cent, as central banks around the world pledged to maintain stimulus measures to support the global economy.

NEW YORK
US stocks fell after the S&P 500 index rallied to a record on Wednesday.

“People know the Fed at some point has to start a tapering process,” said Cameron Hinds, a Lincoln, Nebraska-based regional chief investment officer for Wells Fargo Private Ban. “Longer term, there’s also an indication of a little lack of confidence from the Fed in terms of the economic growth.”