Markets reach for the sky, as Ryanair nosedives 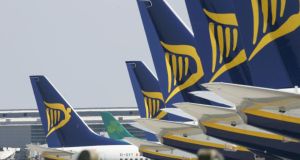 Ryanair said net income for the year would be between €500 and €520 million, having previously guided €570 million. The malaise in airline shares across Europe sparked by the Ryanair announcement also dragged down Aer Lingus, which slipped more than 8 per cent ahead of a trading update. Photograph: Alan Betson

The Iseq tracked other exchanges into positive territory yesterday, as European stocks rose to a five-year high on expectations that the European Central Bank may cut interest rates even further this week.

The buoyant mood yesterday was further enhanced by a strong performance from HSBC – Europe’s biggest bank – fuelling hopes that the continent’s economy may bounce more strongly than expected.

National benchmark indexes rose in 14 of the 18 western European markets. The FTSE 100 in London and France’s CAC 40 both added 0.4 per cent, while Germany’s DAX gained 0.3 per cent.

A profit warning from Ryanair wasn’t enough to drag down the Iseq in Dublin. It still managed to rise by about 0.6 per cent on modest volumes.

DUBLIN
As markets climbed skywards, Ryanair went into a nosedive following its second profit warning. It tumbled 13 per cent to €5.33, its biggest drop in five years. It said net income for the year would be between €500 and €520 million, having previously guided €570 million. The malaise in airline shares across Europe sparked by the Ryanair announcement also dragged down Aer Lingus, which slipped more than 8 per cent ahead of a trading update.

After a quiet morning for CRH, the building materials giant jolted into life in the afternoon, ending the day up 3.2 per cent. Traders said the boost was influenced by positive results from its US rival, Vulcan Materials. CRH relies heavily on the US market.

Bank of Ireland continued its recent good run, climbing almost 4 per cent to close the day at 26.6 cent. The stock was traded heavily, with 130 million shares changing hands in more than 11,000 separate deals.

LONDON
HSBC advanced 2.3 per cent to £7.03, its biggest increase in two months. Europe’s largest bank said pretax profit rose to $4.53 billion in the third quarter, from $3.48 billion a year earlier. Costs fell to 61 per cent of revenue from 64 per cent.

Yesterday was a good day for mining stocks in London. Antofagasta, which owns copper mines in Chile, climbed 3.2 per cent to £8.63, while Rio Tinto, the world’s second-biggest commodity producer, gained 3.3 per cent to £32.89.

Weir slid 3.7 per cent to £21.73, its biggest slide since the beginning of July. The UK’s biggest supplier of pressure pumps said weakness in the US and Australian markets will reduce full-year profit by as much as £12 million.

EUROPE
PostNL climbed 7.8 per cent to €4.17 in Amsterdam. The company said it has cut costs and boosted its forecast for full-year underlying cash operating profit to €130 million to €160 million, compared with previous guidance of up to €90 million.

UBS, the biggest Swiss bank, sank 5.3 per cent to 16.54 Swiss francs, while Credit Suisse slid 6.7 per cent to SFr26.21, the biggest drop in 15 months. The Swiss finance minister Eveline Widmer-Schlumpf said this week that lenders, including UBS and Credit Suisse, may have to pull out of investment banking.

NEW YORK
US-listed shares of Blackberry tumbled 13.8 per cent to $6.70 a share after the smartphone maker said it was abandoning a plan to sell itself and instead, would replace its chief executive officer Thorsten Heins. Former Sybase boss John Chen will become executive chairman, putting him in charge of the company’s strategy.

Kellogg, the world’s largest cereal maker, increased 1.6 per cent to $63.30. The company’s cost-saving program, known as “Project K,” will result in total, pretax charges of between $1.2 billion and $1.4 billion.

US Steel climbed 4.5 per cent to $26.95. Goldman Sachs raised its rating of the largest US steel producer to buy from sell. The shares closed last week at a 10-month high after the company shut down some capacity. – (Additional reporting: Bloomberg/Reuters)