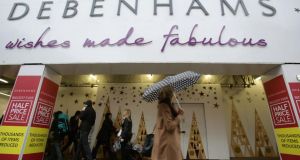 The Debenhams store on Oxford Street, London. The group’s chief financial officer resigned after a warning of a profits plunge as a hoped-for sales surge in the last week before Christmas failed to materialise. Photograph: Yui Mok/PA

World stock markets kicked off 2014 with a whimper yesterday, weighed down by disappointing Chinese manufacturing data. After their best run in 15 years, US markets fell in early trading, with major indexes posting their largest daily drops in three weeks.
DUBLIN
It was a subdued start to the new year in Dublin, albeit on light volumes. The Iseq index of Irish shares opened up positively and ended the day on a stronger note than its European peers, up 15.4 points at 4,554.

It was a good day for IFG, which increased by nearly 5.2 per cent, to close at €1.85. Shares in the financial services company have fluctuated in recent weeks amid reports of a takeover approach. “Maybe people feel there is no smoke without fire,” one broker said yesterday.

BHP Billiton, Rio Tinto and Anglo American declined between 0.9 and 2.1 per cent, putting pressure on the FTSE 100, which ended 0.5 per cent lower at 6,717.91 points. Ophir Energy slumped the most since August, falling 8.2 per cent after saying it did not find hydrocarbons at a well in Tanzania.

Debenhams gained 3 per cent following the resignation of its chief financial officer, two days after the retailer forecast a profit decline because of weak Christmas business. The stock had tumbled 12 per cent on December 31st after the company said sales during the Christmas week missed its expectations.
EUROPE
European stocks slipped as soft Chinese and French manufacturing data prompted investors to start new year trading by cashing in a portion of the lofty gains made in 2013.

Italian car-maker Fiat bucked the trend, rallying the most since April 2009. Shares soared 16 per cent to €6.92 in volumes more than five times the stock’s daily average, after the company struck a $4.35 billion deal to gain full control of US carmaker Chrysler without raising fresh funds.

RWE slipped 3.6 per cent to €25.65 after Handelsblatt reported that the German utility may ask shareholders to give it the option to raise capital.

Madrid-based Endesa fell 2.4 per cent to €21.25 after finishing last year at its highest price since June 2011. CGG lost 2.4 per cent to €12.28 as UBS lowered its rating on the stock to neutral from buy and reduced its estimate for 2013 earnings before interest.

The Stoxx Europe 600 lost 0.7 per cent to 325.82 at the close. Germany’s Dax and France’s Cac 40 slipped 1.6 per cent.
US
US stocks fell back in early trading yesterday as investors opened the year on a cautious note after the S&P 500 wrapped up its best year since 1997, despite economic data pointing to continued growth in the economy.

The Institute for Supply Management said its index of national factory activity stood at 57.0 last month, in line with economists’ forecasts but a touch below November’s 2½-year high of 57.3. A reading above 50 indicates expansion.

Apple fell 1.4 per cent after Wells Fargo cut its rating on the stock, sending technology shares to their worst performance in the S&P 500. Analog Devices lost 3.1 per cent after Goldman Sachs advised investors to sell. – Additional reporting: Bloomberg, Reuters