Bank of Japan disappointed some investors by holding its policy steady 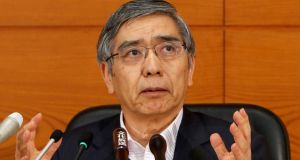 European shares fell to six-week lows on fresh concern that central bank support for markets was turning more cautious, and some expected further weakness in the near term.

DUBLIN
On a par with European stock markets, the Iseq index ended lower, falling 1.5 per cent to 3,907.

The majority of stocks on the Dublin market tumbled, or closed flat.

Bank of Ireland was the biggest loser of the day, retreating 7 per cent to 15.9 cent, the largest slump in almost three months. The shares dropped after Fitch Ratings said Irish banks may need more capital due to loan impairments.

Antofagasta, Anglo American and Glencore Xstrata all slid more than 2 per cent as metal prices fell in London.

HSBC Holdings and Prudential led a sell-off in financial companies. HSBC, Europe’s largest bank and the heaviest stock on the FTSE 100, lost 1 per cent, while Prudential, the UK’s largest insurer, slumped 3.7 per cent.

Waning growth in China, a crucial region for luxury goods firms, weighed on Burberry, which was down 4.8 per cent.

EUROPE
European stocks retreated for a second day as the Bank of Japan refrained from expanding stimulus and Treasuries sank amid speculation the Federal Reserve will trim bond purchases.

Legrand retreated 4.1 per cent after investor group Wendel sold the remaining 14.4 million shares it holds in the world’s largest maker of switches, plugs and lighting controls.

Infineon Technologies added 3.3 per cent after Citigroup upgraded the stock.

The Stoxx Europe 600 Index fell 1.2 per cent to 291.74 at the close of trading, as Germany’s top court began hearings on the European Central Bank’s Outright Monetary Transactions programme.

US
US stocks fell in early trading following the Bank of Japan’s decision to hold monetary policy steady, but indexes were well off lows as investors took earlier dips in the market as a buying opportunity.

The Dow Jones industrial average erased nearly all its losses to trade flat at midday, supported by gains in Pfizer and Unitedhealth, which were both up more than 0.6 per cent.

Financial and materials groups led the way down, falling nearly 1 per cent each.

Among individual companies, shares of Lululemon Athletica slumped after the company’s chief executive officer said she will step down. The stock was down more than 17 per cent at $68.05.

SoftBank Corp said it agreed with Sprint Nextel Corp to raise its offer for the US wireless carrier to $21.6 billion from $20.1 billion. Sprint was up 2.5 per cent at $7.36. – (Additional reporting: Bloomberg, PA, Reuters)

6 The Irish Times Business Person of the Month: Anne Heraty

7 We are ‘sale agreed’, but can we go back with a lower offer?