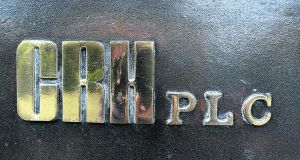 The closure of the New York exchange to mark the July 4th celebrations meant a very slow start to the day in European exchanges, although business picked up after lunchtime comments in London and Frankfurt.

In London the Bank of England told investors they were being too quick to bet on higher interest rates as new governor Mark Carney began to deploy his favoured strategy of giving guidance on the policy path ahead. In Frankfurt ECB president Mario Draghi said it expects to keep interest rates low for an “extended period of time”.

The comments from the two central banks gave a boost to the markets, where volumes picked up to levels higher than would normally be expected on a day when the US was celebrating Independence Day.

DUBLIN
In Dublin the share price of Bank of Ireland mirrored what was happening with many of its European and UK peers. It climbed to €0.17, a rise of 7.14 per cent on the day.

The largest company on the exchange, CRH, climbed 4.38 per cent, to €15.86, with reasonable volumes.

LONDON
UK stocks surged, sending the FTSE 100 index up by the most since November 2011, after the Bank of England signalled that interest rates would remain at a record low for longer than expected. The benchmark FTSE 100 index jumped 191.8 points, or 3.1 per cent, to 6,421.67 at the close in London.

Royal Bank of Scotland and Barclays jumped more than 4 per cent as the central bank left its benchmark interest rate unchanged. RBS climbed 5.2 per cent to 284.1 pence. Barclays advanced 4.3 per cent to 292.7 pence. HSBC Holdings, Europe’s largest bank, added 4.5 per cent to 711.4 pence.

Taylor Wimpey led construction-related companies higher, rising 7.1 per cent. It rallied 7.1 per cent to 103.8 pence.Redrow jumped 7.2 per cent to 237.9 pence after the builder said pretax profit for the year ended June would beat analyst estimates. Persimmon and Barratt Developments also advanced, rallying 4.4 per cent to 1,266 pence and 5 per cent to 333.8 pence respectively.

Rolls-Royce Holdings gained 4.7 per cent to 1,191 pence. British Airways said it would start regular services with the Airbus A380 superjumbo a week earlier than planned. Rolls Royce is the sole engine provider for the aircraft.

EUROPE
European stocks rose the most in more than two months as the European Central Bank said that interest rates would remain low for an extended period, and Portugal’s political leaders sought to hold their coalition government together.

Oerlikon rose 3.5 per cent to 11.70 Swiss francs after the maker of textile machinery said it would receive 470 million francs (€380m) from the sale of its natural fibers business to Jinsheng Group of China.

Continental, Europe’s second largest car-parts maker, rose to the highest in almost 21 years as forecasts that the region’s car and truck markets will stop declining raised investor confidence in the industry. Continental gained as much as 4.15 per cent to €109.05.

Volkswagen, Daimler and Continental all advanced at least 3.5 per cent as a gauge of European carmakers rose to its highest level in two weeks.

Peugeot Citroen surged 10 per cent to €6.86, its biggest gain since April 24th. Goldman Sachs Group upgraded the shares of the French automaker to buy from neutral. – (Additional reporting, Bloomberg)