Dollar sinks to lowest in six weeks on unsettling data 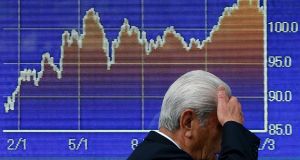 The dollar sank to its lowest in six weeks against the yen on Tuesday, as more unsettling economic data drove US government bond yields towards critical lows which have held since November and a handful of major risk events loomed.

A plunge in sterling risk reversals - options used to hedge against or bet on falls in the pound - underlined the nerves over Britain’s election on Thursday, even if the pound itself was steady after a 3 per cent fall in the past month .

A European Central Bank meeting and former FBI director James Comey’s testimony to a Senate committee are due on the same day, supporting flows of money into the traditional security of the yen.

“People are thinking what are the events we need to worry about, and with the things all coinciding on Thursday, a bit of risk has been taken off the table,” said Jeremy Stretch, a strategist with CIBC in London.

“It’s a function of Japanese investors who are just deciding against the backdrop of the spreads (between Japanese and US government bonds).”

With the Bank of Japan keeping 10-year Japanese bond yields pinned to zero, the dollar-yen exchange rate has been closely correlated for the past year with any shifts in US 10-year Treasuries.

“It is worth pointing out that the US 10-year is hovering above the key technical level at 2.13 per cent,” Rabobank analysts said in a morning note to clients.

“It must hold to prevent further retracement, with the psychological level of 2 per cent as the next potential target if cleared.”

Comey, the FBI director fired by US President Donald Trump in May, will be grilled by the Senate Intelligence Committee on whether Trump tried to get him to back off an investigation into alleged ties between the president’s 2016 campaign and Russia.

The threats to Trump and some of his senior advisors the affair has added to market doubts over the administration’s ability to deliver a promised boost to growth through tax cuts and infrastructure spending.

While US economic data has worsened, in Europe it has been improving and expectations have grown for some sort of change in the European Central Bank’s rhetoric this week.

Most traders, however, say it may now by difficult for that to top the expectations priced into the euro itself.

“Central banks seem to be very good at leaking everything before the event,” said Richard Benson, co-head of portfolio investment with currency fund Millennium Global in London.

“The euro looks stronger than most rate differentials would suggest. I think all expectations for Thursday are in the price.”