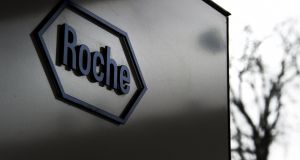 The Swiss pharmaceuticals group had hoped to defend itself against the launch of a copycat version of its blockbuster breast cancer medicine, Herceptin, by combining the drug with one of its newer drugs, Perjeta

Roche’s hopes of protecting its $7 billion breast cancer franchise with a new drug cocktail were dealt a blow after a large trial showed the combination was only marginally better than an older medicine made by the company.

In early trading in New York, Roche’s shares fell by 8 per cent – its biggest drop since April 2009. There was no trading in Zurich on Monday due to a public holiday.

The Swiss pharmaceuticals group had hoped to defend itself against the launch of a copycat version of its blockbuster breast cancer medicine, Herceptin, by combining the drug with one of its newer drugs, Perjeta.

The clinical trial showed that the two medicines were better than one at stopping cancer returning after surgery, but that the benefit was slight.

After three years, 94.1 per cent of patients taking the cocktail were disease-free, versus 93.2 per cent of those on Herceptin alone, according to the data, which were presented at the world’s largest cancer meeting, in Chicago on Monday.

Roche has already secured regulatory approval for the combination in some breast cancer sufferers, but oncologists could decide to stick to the single drug for the majority of patients after seeing the data.

“The trial tells us the combo is better than the single regimen, but that the difference is small,” said Dr Daniel Hayes, president of the American Society of Clinical Oncology, which is organising the conference in Chicago.

But the patents protecting Herceptin have expired, and Mylan, a generic drugs company, in March reached an agreement with Roche that would allow it to start selling a cut-price “ biosimilar” version of the medicine in large markets.

1 Opioid executive admits to ‘no morals’ ahead of prison term
2 My father in a nursing home wants to gift me his house
3 Little strategic thinking in election manifestos of Fine Gael and Fianna Fáil
4 Who are Ireland’s 17 billionaires?
5 CPL founders Anne Heraty and Paul Carroll in line for €1m dividend payout
6 American YouTubers embrace the crisp sandwich
7 Are there annual limits on inheritances or gifts to a child?
8 Budget 2020: New emissions tax on new cars and used imports
9 Ireland’s €200bn debt burden: how did we get here?
10 Fallon & Byrne founders McHugh and Byrne exit group
Real news has value SUBSCRIBE