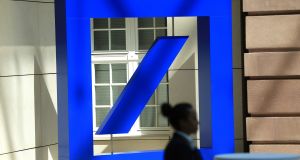 A Deutsche Bank downgrade on the euro zone banking sector soured sentiment. Strategists at the German bank cut their rating on European banks to “underweight” and recommended investors lock in gains. Photograph: Bloomberg

European shares fell on Tuesday, marking their fourth straight day of losses, with banks leading the decline on fresh political jitters. The Iseq bucked the trend, rising by a third of a per cent.

British blue chips eased from record highs as sterling recouped some of last week’s losses less than two weeks before a general election that will shape talks for the country’s exit from the European Union.

US stocks halted a seven-day advance, while the dollar fluctuated as data showing a rebound in consumer spending offset a wider sell-off in commodities.

Ryanair jumped 3.8 per cent after Europe’s biggest carrier by passengers reported a record annual profit that was in line with market expectations. The airline’s traffic grew 13 per cent while its unit costs were down 5 per cent. Ryanair also announced a €600 million share buyback.

Irish Ferries owner, Irish Continental Group, fell 1.5 per cent a day after announcing it had sold off a ship.

Sterling weighed on shares of heavyweights such as British American Tobacco, Shire and Imperial Brands – all of which make most of their revenues outside the UK. The three were the biggest drags on the FTSE 100 on the day.

Meanwhile, British Airways and Aer Lingus owner IAG ended the day down 1.4 per cent, among the top fallers on the index despite some of its earlier losses through the afternoon session. It was the first trading for the stock following massive weekend disruption to flights due to an IT outage.

Shares in paint maker Akzo fell 1.5 percent as chances of a takeover by US rival PPG slimmed after a court rejected a request by dissident investors to take action against the Dutch group over its rejection of the takeover.

The energy sector’s 0.94 per cent fall led the decliners among the major S&P 500 sectors. Exxon was down 0.4 per cent, while Chevron fell 0.2 per cent.

Adding to the pressure, financial stocks were down 0.5 per cent. JPMorgan fell 1.1 per cent, weighing the most on the S&P, while Goldman Sachs’ 1.6 per cent decline dragged on the Dow.

Alphabet’s class A shares were close behind, after hitting a record of $997.62. CardConnect’s shares jumped 10.3 per cent to $15.05 after First Data agreed to buy the payment processor for $750 million. First Data was up 0.8 per cent.