Dollar edges off lows over expectations of a rate hike

The Federal Reserve is targeting a 2% inflation goal 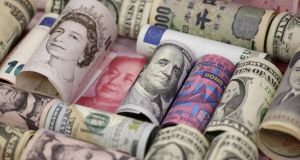 The dollar index, which measures the greenback against a basket of six major currencies, fell more than 1 per cent to its lowest in more than seven weeks at 94.426.

The US dollar hit its lowest levels in more than seven weeks against the euro, yen and Swiss franc on Tuesday, a day after dovish comments from a top Federal Reserve official, but pared losses after remarks from the head of the New York Fed raised expectations for a rate hike this year.

The dollar hit its lowest levels against those three currencies since June 24th, or the day after Britain voted to exit the European Union, which caused tumult in global markets.

The dollar index, which measures the greenback against a basket of six major currencies, also fell more than 1 per cent to its lowest in more than seven weeks at 94.426.

Data showing US consumer prices were unchanged in July, marking the weakest reading since February, also reinforced scepticism that the Fed would hike rates by December.

“The net takeaway is that the Fed may be so concerned about the long-term robustness of the economy and therefore, rate hikes are going to be slow,” said Steven Englander, global head of foreign exchange strategy at Citigroup in New York.

The dollar pared losses immediately following the CPI data, however, after New York Fed president William Dudley said that the US central bank could possibly raise rates as soon as September.

“Many still believe the Fed has a chance to hike later in the year,” said Richard Scalone, co-head of foreign exchange at TJM Brokerage in Chicago. “Dudley said that later in the day, and that’s what gave us a little bit of a reversal.”

1 PTSB plays down Ulster Bank talk as it sells €1.4bn of loans
2 Am I crazy to consider switching to an Ulster Bank mortgage?
3 Irish tech company Asavie acquired by Nasdaq-listed Akamai
4 Housing crisis will be permanent unless there is radical rethink, industry warns
5 Up or down – how much is your Local Property Tax this year?
6 How much state pension will I get next year?
7 Disposable income in Ireland rose 28% between 2012 and 2019
8 Ghost newspapers and zombie brands are stalking the media
9 First Derivatives expects Covid-19 to accelerate growth
10 Pandemic halves the value of venture capital deals in third quarter
Real news has value SUBSCRIBE