Costly financial sector gives us little or nothing 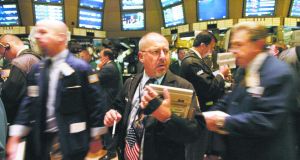 Society is devoting an ever-growing share of its resources to financial wheeling and dealing, while getting little or nothing in return.

We’re giving huge sums to the financial industry while receiving little or nothing in return.

Four years ago Chris Christie, the governor of New Jersey, abruptly cancelled the biggest and arguably most important infrastructure project in the United States, a desperately needed new rail tunnel under the Hudson river. Count me among those who blame his presidential ambitions and believe he was trying to curry favour with the US government and his public-transit-hating Republican base.

Even as one tunnel was being cancelled, however, another was nearing completion, as Spread Networks finished boring its way through the Allegheny mountains of Pennsylvania. Spread’s tunnel was not, however, intended to carry passengers, or even freight: it was for a fibre-optic cable that would shave three milliseconds off communication time between Chicago’s futures markets and New York’s stock markets. The fact that this tunnel was built while the rail tunnel was not tells you a lot about what’s wrong with the US today.

Who cares about three thousandths of a second? The answer is, high-frequency traders, who make money by buying or selling stock a tiny fraction of a second faster than other players. Not surprisingly, Michael Lewis starts his best-selling new book Flash Boys , a polemic against high- frequency trading, with the story of the Spread Networks tunnel. But the real moral of the tunnel tale is independent of Lewis’s polemic.

Think about it. You may or may not buy Lewis’s depiction of the high-frequency types as villains and those trying to thwart them as heroes. (If you ask me, there are no good guys in this story.) But, either way, spending hundreds of millions of dollars to save three milliseconds looks like a huge waste. And that’s part of a much broader picture, in which society is devoting an ever-growing share of its resources to financial wheeling and dealing, while getting little or nothing in return.


Hundreds of billions wasted
How much waste are we talking about? A paper by Thomas Philippon of New York University puts it at several hundred billion dollars a year. Philippon starts with the familiar observation that finance has grown much faster than the economy as a whole. Specifically, the share of gross domestic product accruing to bankers, traders, and so on has nearly doubled since 1980, when we started dismantling the system of financial regulation created as a response to the Great Depression.

What are we getting in return for all that money? Not much, as far as anyone can tell. Philippon shows that the financial industry has grown much faster than either the flow of savings it channels or the assets it manages.

Defenders of modern finance like to argue that it does the economy a great service by allocating capital to its most productive uses – but that’s a hard argument to sustain after a decade in which Wall Street’s crowning achievement involved directing hundreds of billions of dollars into subprime mortgages. Wall Street’s friends also used to claim that the proliferation of complex financial instruments was reducing risk and increasing the system’s stability, so that financial crises were a thing of the past. No, really.

But if our supersized financial sector isn’t making us either safer or more productive, what is it doing? One answer is that it’s playing small investors for suckers, causing them to waste huge sums in a vain effort to beat the market. Don’t take my word for it – that’s what the president of the American Finance Association declared in 2008. Another answer is that a lot of money is going to speculative activities that are privately profitable but socially unproductive.

You may object that this can’t be right, that the invisible hand of the market ensures private returns and social returns coincide. Economists have, however, known for a long time that when it comes to speculation that proposition just isn’t true. Back in 1815, Baron Rothschild made a killing because he knew the outcome of the Battle of Waterloo a few hours before everyone else; but it’s hard to see how that knowledge made Britain as a whole richer. It’s even harder to see how the three millisecond advantage conveyed by the Spread Networks tunnel makes modern America richer; yet that advantage was clearly worth it to the speculators.

In short, we’re giving huge sums to the financial industry while receiving little or nothing – maybe less than nothing – in return. Philippon puts the waste at 2 per cent of GDP. Yet even that figure, I’d argue, understates the true cost of our bloated financial industry. For there is a clear correlation between the rise of modern finance and the US’s return to Gilded Age levels of inequality.

So never mind the debate about exactly how much damage high-frequency trading does. It’s the whole financial industry, not just that piece, that’s undermining our economy and our society.