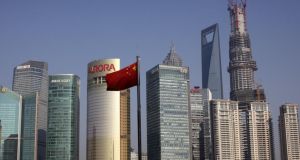 China stocks suffered their biggest one-day percentage drop in more than six and a half years, dragged down by record tumbles in financial stocks as authorities battled excessive market speculation.

Regulators cracked down on margin trading, which has been blamed for fuelling a wave of speculation over the past three months.

Bank stocks were hit after the banking regulator issued draft rules to tighten supervision of entrusted loans, a kind of shadow banking.

The banks sub-index plummeted 9.97 per cent and the financial sub-index sank 9.62 per cent.

All China CSI300 stock index futures were down at least 10 per cent, except the September index which dove 12 per cent.

The falls were the biggest for both indexes since June 10, 2008.