Aviation regulator says levy paid to airport should be cut from €9.65 a head to €7.50 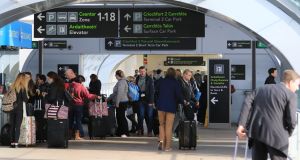 Air travel watchdog, the Commission for Aviation Regulation (CAR), wants Dublin Airport to cut the passenger charges it levies on airlines to €7.50 a head for the 2020-24 period.

The commission proposed the 20 per cent or so cut this week in a consultation document that marked the beginning of a five-month process at the end of which the regulator will determine how much the airport can charge airlines for flying passengers from there.

The airport’s owner, State company DAA, says bluntly that reducing its charges to €7.50 a head will mean it cannot afford to proceed with a proposed €1.8 billion plan to boost Dublin’s facilities to enable it handle 40 million passengers a year, a figure it could hit during the next decade. The company based its investment plan on keeping its 2018 price of €9.65 a head unchanged in coming years.

The CAR argues that the DAA can still spend €1.8 billion on the extra aircraft stands and facilities its airline customers need with a €7.50-a-head charge. The airport will have more passengers, which will help make up the deficit between old and new charges.

At the same time, the CAR says Dublin Airport’s costs will rise more slowly than anticipated and it will be able to borrow the money needed for its revamp at lower interest rates than originally calculated.

Those are some areas where the DAA and CAR differ. However, the regulator agrees with the airport company on the need to extend Dublin’s facilities. The commission speaks highly of the plan, saying airlines support it as it comes close to meeting what they need from the airport.

Those airlines, Aer Lingus and Ryanair among them, will soon be contributing their own submissions to the CAR’s consultation process. They want Dublin Airport’s facilities improved to handle more passengers, but they will find the lure of cheaper passenger charges hard to resist. Now that the regulator has suggested they could have both, it is not difficult to see what side they could take in this debate.