Wrightbus administrators in exclusive talks with one buyer 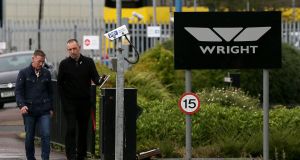 Administrators of the Wrights Group in Ballymena, Co Antrim, are in exclusive talks with one potential buyer, thought to be hydrogen entrepreneur Jo Bamford, the son of the billionaire JCB chairman, Anthony Bamford.

Union leaders have, however, warned that any possible rescue deal is dependent on “resolving” an issue over the ownership of the bus manufacturer’s factory site. It is understood that a deadline of 10am on Thursday has been put on this.

The bus manufacturer, which was privately-owned and controlled by the Wright family, went into administration 15 days ago with the immediate loss of 1,200 jobs.

Industry sources have indicated that Mr Bamford is exploring the possibility of acquiring the Wrights Group because it would “sit well” with his company, Ryse Hydrogen, which he founded two years ago. This business specialises in providing hydrogen fuel for buses but is seeking to expand this to supply “hydrogen for other modes of transport”.

Wrightbus, which is part of the Wrights Group, has pioneered the development of hydrogen fuel cell technology.

Earlier this year, Transport for London confirmed plans to invest £12 million (€13.4 million) in 20 new hydrogen double decker buses and the fuelling infrastructure required for them – Wrightbus was to deliver the buses while Ryse Hydrogen would supply the hydrogen for the 20 buses, which were scheduled to be introduced next spring.

Sources believe that acquiring the Wrights Group would provide Mr Bamford with an opportunity to fast-track his stated ambition to “totally decarbonise the entire UK bus fleet by 2030”.

But union leaders have warned that discussions over a potential sale of the Wrights Group by administrators, Michael Magnay and Peter Allen from Deloitte, have reached a critical stage and could stall because of issues surrounding the Wrightbus factory site.

Neither Wrightbus nor the Wrights Group are the registered owners of the bus manufacturing facility in Ballymena.

Instead it is owned by an investment property company, Whirlwind Property Two Limited, which is controlled by Jeff Wright, the son of the founder of the Wrights Group, William Wright.

The Wrightbus factory in Ballymena is located on what was previously the JTI/Gallaher tobacco factory in Lisnafillan which closed in 2016 with the loss of more than 800 jobs. Wrights Group said it was taking possession of the site later that year.

No details of the transaction were disclosed at the time but subsequent accounts for Gallaher Limited detailed “gains” of £12.6 million from the disposal of “property, plant and equipment” in connection with its former Lisnafillan site.

Unite’s regional officer for Wrightbus, George Brash, said on Wednesday that 1,200 workers’ “livelihoods and the entire local community now hang in the balance”.

“We are in a situation where if the issue of the land is not resolved in the next twenty-four to forty-eight hours then the prospect of safeguarding their future will disappear.

“Unite will be seeking a direct meeting with Jeff Wright to demand he does the right thing and hand over the land so as to remove this final obstacle to a sale and the gates reopening,” Mr Brash said.