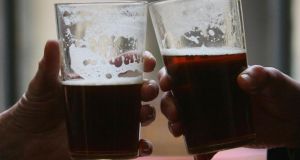 In a climbdown deal announced yesterday, JD Wetherspoon has agreed to resume selling all Heineken’s products in the UK. Photograph: Matt Cardy/Getty Images

So, who won the row between Heineken and JD Wetherspoon over the British pub giant’s cut-price lager sales in the Irish market? It looks like they both did. Who lost? The Irish consumer, as always.

Wetherspoon and Heineken began shaping up to each other last month over the pub group’s penchant for selling Heineken for less than €3 per pint in its nascent Irish operation. Local publicans usually price it at closer to €5. Heineken threw a strop and refused to supply it here, so Wetherspoon pulled its products from its entire network of almost 1,000 establishments in Ireland and Britain.

In a climbdown deal announced yesterday, Wetherspoon has agreed to restate all Heineken’s products in the UK. Breathe easy, British lager lovers.

It still won’t sell Heineken or Murphy’s stout in Ireland, however. Instead, it will stock Heineken’s Fosters lager brand, as well as some obscure cider that nobody here has ever heard of – a nice, sparkling pint of Symonds, anyone? Wetherspoon, the big, bad UK pub group that was supposed to shake up the Irish pub market with 30 new outlets, will not sell any of the most popular draught beers in Ireland.

Food is a huge part of Wetherspoon’s offering in the UK, and will increasingly become a more important part of the revenue stream of Irish publicans. But until then, Irish people primarily go to the pub to drink.

A new player in the Irish market with potentially significant scale, like Wetherspoon, had a golden opportunity to soften the cough of the big beer-distribution duopoly of Diageo and Heineken, which has served Irish pubgoers so badly. Irish pints are so expensive precisely because of the stranglehold exerted on publicans by this duopoly.

Wetherspoon could have shaken the market up, forcing discounts from the brewers and, consequently, lower prices all round. Instead, it fluffed its lines by caving in. What a pity.