Loopholes - like removing interior trim to save weigh and over-inflating tyres - are all allowed, making a mockery of the test regime 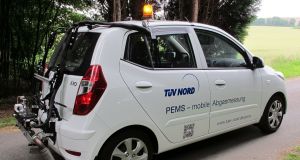 German firm ÜV-Nord has developed a testing system that will provide proper on-road test results. It is due to be intorduced to the German certified testing regime next year.

The European test for vehicle emissions is supposedly even more stringent and better-overseen than the American one, but the fact is that you can, almost literally, drive a coach and horses through the loopholes in the test.

As has been much-discussed in recent years, the current New European Driving Cycle (NEDC) test, from which all official CO2 and fuel economy figures are taken, actually allows car makers to set up their cars in such a way that no-one could really drive them on the public road.

Spare wheels and interior trim can be removed to save weight, body panel gaps can be taped up to improve aerodynamics, and wing mirrors can be taken off for the same purpose. The car’s battery can be externally charged and the alternator disconnected to reduce strain on the engine.

Air conditioning is never used and non-standard low-rolling resistance tyres can be fitted, and they can be over-inflated to near the point of exploding, all in the name of setting the best possible figure on the official test. All of this is entirely legal and above board, under the current system, which rather puts Volkswagen’s actions into some sort of perspective.

Campaign group such as Brussels-based environmental lobbyists Transport & Environment (T&E) suspects that a combination of these allowed cheats, and more hidden devices, is making the current emissions tests all but meaningless. “Through trickery, the gap between official fuel economy figures and those achieved by an average driver have grown to 40 per cent,” it estimates.

For new diesel cars nitrogen oxide emissions are typically five times higher on the road than the allowed limit and just one in 10 cars meets the required level on the road. But for some models the gap is so large T&E suspects that the car is able to detect when it is tested using a “defeat device” and artificially lowers emissions during the test” said a T&E spokesperson. “Why haven’t European authorities undertaken similar tests to their US equivalents?”

Regrettably, the European system of testing is much less independent and robust than that in the US where 10-15 per cent of new models are retested by the US authorities in their own laboratories.

In Europe carmakers pay certified testing organisations to perform tests in the carmakers’ own laboratories. The tests are overseen by National Type Approval Authorities. But carmakers ‘shop’ for the best deal from agencies across Europe and directly pay for their services. The job of the engineer overseeing the test is ultimately dependent on the next contract from the carmaker.”

In Germany the future testing of on-road car emissions has been developed by TÜV-Nord a technical inspection company which tests everything from lifts to satellites.

The Hanover-based company, established in 1869 to test boilers and steam locomotives, has developed the Portable Emissions Measurement System (PEMS). The €100,000 device is small enough to fit in a car boot and looks like an expensive bicycle carrier. To test emissions it is mounted on the back of the vehicle with a head that goes into the exhaust pipe. A protected cable leads into the car where computer equipment records the emissions results and cross-references them GPS data to give a precise read-out of the test conditions.

The scandal, originating in the US, has raised questions in Germany about whether authorities in VW’s home market had no idea that emission manipulation was going on.

In March 2015 the state environment authority in Baden-Württemberg, home to Daimler, published a study using the PEMS device. In certain circumstances the three cars tested - the BMW 320d, Volkswagen CC and Madza 6 - were unable to meet the legal limit of 80 miligrams of nitrogen oxide per kilometre. The Mazda had the dirtiest diesel engine, the study claimed, with more than 2,500 miligrams per kilometre, 31 times the legal limit.

The potential - and risks - of PEMS have long been recognised by the EU and car industry. In submissions, the European car lobby group ACEA has proposed a phased-in introduction of the new testing using a term it calls “conformity factor” - the multiple by which engines can exceed current emission limits. In 2017 the ACEA proposes a conformity factor of 7 - allowing engines seven times more polluting than the legal limit - dropping later to 2.75 and then 1.6 by 2020.

TÜV-Nord says it is confident that its PEMS device, currently undergoing final testing, will be part of the testing for new car certification in Germany by 2017 at the latest.

“We want to replace unreal laboratory test results with real-world test results,” said Mr Rainer Camen, spokesman for TÜV-Nord. “The car manufacturers say they want to co-operate but, in reality, they can’t not co-operate.”

If Ireland wants to participate in the PEMS system, said Mr Camer, the Irish authorities could either oblige car companies to buy in the TÜV-Nord system, or else link Irish car permits to German or EU norms.