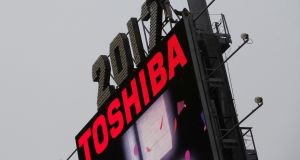 Toshiba does not plan to announce the precise size of its write-off until February. Photograph: Reuters

Shares in Toshiba fell 17 per cent to ¥257 (€2.10) on Thursday, taking the total loss of equity value to more than 40 per cent since the Japanese company announced that it was facing a multibillion-dollar writedown at its US nuclear division Westinghouse.

As investors continued to digest Tuesday’s warning, shares in some of Japan’s biggest banks slid after the electronics-to-nuclear conglomerate raised the prospect of losses on their loans.

The declines suggested a high risk of a debt-to-equity swap or other restructuring at Toshiba, underlining the severity of its crisis over accounting for US nuclear contracts.

Toshiba declined to comment. The company has said it does not expect to announce the precise size of the necessary write-off until February, leaving analysts speculating that it could fall into negative equity, and investors unwilling to trust its disclosure.

“Although Toshiba is still assessing the exact amount of the impairment loss, its financial metrics will likely deteriorate further, potentially resulting in a negative equity position,” said Moody’s, which cut its rating on the company from B3 to Caa1.

“Toshiba’s ability to maintain its solvency would depend on whether its relationship banks are willing to provide ongoing support. The availability of such support in such a situation is currently uncertain,” the credit rating agency added.

Toshiba’s banks have repeatedly bailed out the company after a succession of business woes and accounting issues in recent years. According to SMBC Nikko analyst Shinichiro Nakamura, Sumitomo Mitsui Trust, Mizuho, and SMFG subsidiary SMBC each have outstanding loans to Toshiba of more than $1 billion, and all are unsecured.

Sumitomo Mitsui Trust’s relatively small size means its exposure amounts to 5.5 per cent of its capital base.

Toshiba’s goodwill issue relates to its US nuclear business Westinghouse’s purchase last year of construction contractor Stone & Webster from Chicago Bridge & Iron (CB&I). It initially booked goodwill of $87 million on the deal, but the rising cost of materials and goodwill to complete several nuclear plants in the US mean the company’s assets are worth less than expected.

Lower asset values would mean a higher figure for goodwill, which Toshiba would have to write off, hitting its net equity. Toshiba is also in dispute with seller CB&I over the calculation of net working capital in the business.

Deutsche Securities analyst Yu Yoshida said the working capital shortfalls may be more serious than cost inflation, but he expects Toshiba to avoid insolvency because the weakness of the yen has delivered strong profits for its flash memory business.

Toshiba has been engaged in a massive restructuring since an accounting scandal last year in which it admitted it inflated profits by $1.3 billion over seven years. The company has been selling off divisions, including Toshiba Medical to Canon for $6 billion earlier this year, and has largely exited consumer electronics.

Its Nand flash memory division, which provides chip-based storage for devices such as Apple’s iPhone, is a world leader. But Toshiba has been dogged by problems at its nuclear division, which is struggling with a global loss of orders and rise in costs following the Fukushima nuclear disaster in 2011.

Toshiba took a $2.3 billion goodwill writedown on the 2006 acquisition of Westinghouse earlier this year. But the fresh issue at Stone & Webster highlights its open-ended exposure to a series of troubled nuclear contracts.