Walsh Whiskey Distillery aims to attract 75,000 visitors each year to tour its facilities 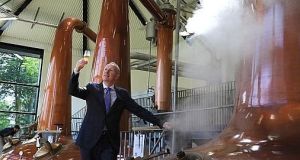 A new €25 million whiskey distillery backed by Italian and Irish investors was officially opened in Royal Oak, Carlow on Tuesday.

Walsh Whiskey Distillery, which has capacity to produce up to 8 million bottles of whiskey annually, is 50 per cent owned by Illva Saronno, which owns the Tia Maria brand.

Other investors include founders and local Carlow couple Bernard and Rosemary Walsh, as well as Pat Rigney, the founder of Boru vodka.

The new distillery, which began production at Easter, has created 55 jobs and is aiming to attract up to 75,000 visitors each year to tour its facilities.

Walsh Whiskey currently produces two brands of whiskey, The Irishman and Writer’s Tears, which it says are distributed in 40 countries globally.

Production of the brands will now shift to the new distillery, although it will be 2019 before the first whiskey produced at the new site becomes available.

1 Direct sea routes to Europe offer certainty in choppy Brexit waters
2 ‘I don’t need to do any of this. . .I don’t actually need to work.’
3 Anti-alcohol zeal of public health experts peppers reopening debate
4 There was no vaccine for Anglo: Why the last crisis was different
5 Move to EU or face disruption, City of London is warned
6 ‘Make plans but don’t hold on to them too seriously’
7 Admission of mistake in Oxford vaccine dose raises doubts over reliability
8 Pavlok: zapping bad habits with 450 volts
9 Solicitor must be struck off over ‘extremely serious’ misconduct, court rules
10 German watchdog reports EY to prosecutors over Wirecard audit
Real news has value SUBSCRIBE