Ireland’s bioeconomy can thrive with the right support 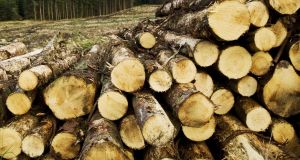 If the right business opportunities were provided for “the forester, the farmer and the mariner”, Ireland would have a thriving bioeconomy, according to the director of the new Beacon research facility based in UCD.

“These are the new Arabs of the bioeconomy. They have oil in the form of forestry and bio-crops...These are very valuable resources,” Prof Kevin O’Connor told a seminar on the importance of forestry in Ireland’s emerging bioeconomy organised by Coillte.

For the Irish bioeconomy to thrive, however, there was a need for education and retraining; the formation of new partnerships with industry, and the development of new products and new markets. People had to be convinced plastics could be generated from trees rather than fossil fuels. Critically, producers needed to be prominent in the value ecosystem, he added.

There were lessons too from the oil industry, he said, which secured most profitability from by-products.

The Beacon facility, which has received €18 million in funding from Science Foundation Ireland, was providing “a knowledge hub” for the production of renewable biological resources and on the conversion of these resources and waste streams into value added products, such as food, and bio-energy.

Individual sectors within the bioeconomy, however, were not developing together, he said. Beacon wanted to promote partnerships – between academics in different disciplines, but also with industry, policymakers and communities. Often, it was “about being more efficient with the resources we have”.

In other cases it involved developing by-products, such as vaccines from lactose; bioactive material from mushrooms or using synthetic biology techniques to make flavour compounds and antibiotics – and finding the lowest energy separation processes to generate such materials.

The EU was providing €4 billion to support new technologies and businesses in the bioeconomy, while an €85 million bioeconomy campus was being established in Lisheen, Co Tipperary, which would also act as a model demonstration facility for Europe, he said.

Coillte Forest managing director Gerard Murphy said the forestry sector needed to ask itself if was prepared to push on to become a key pillar for the Irish bioeconomy. While it was planned to double production over the next decade, there was only 11 per cent cover currently, compared to an EU average of 35 per cent.

There were multiple benefits from forestry as it generated renewable materials; continually sequestered carbon, acted as a carbon sink and was a replacement for cement and plastic.

Afforestation could be the single most effective measure to reduce greenhouse gases emissions and decarbonise the economy, he added, but appropriate standards were needed for wood used in construction, including use of cross laminated timber in buildings and Medite in outdoor settings as a replacement for aluminium and plastics.

With Brexit, competitiveness and innovation in the sector would become more important because of 80 per cent of product was being exported, he noted.

IFA president Joe Healy said “a huge education process” was required if farmers were to embrace opportunities from forestry. They had to be able to see the opportunities for them, and there had to be an absence of excessive red tape, especially in relation to planning. In some areas, there was “negative feeling towards forestry”, such as in the north-west of Ireland, and a belief that there was too much of it.

Minister of State for Agriculture, Food and the Marine, Andrew Doyle said the forestry sector was at the forefront of the emerging Irish bioeconomy in addition to being a major contributor to climate change mitigation and biodiversity. “We must continue this momentum, advancing our sector through sustainable production and use of new wood products and building systems, as well as the rapidly emerging use of wood fibre across a range of innovative products,” he added.

The sector would continue to contribute to environmental sustainability, he said, help decarbonise the economy, and provide rural employment.

1 Paschal’s pitch is based on the economy, Brexit and Project Ireland 2040
2 Ryanair wants Irish courts to block Skyscanner from selling its flights
3 Cosgrave should give his speech to Web Summit’s partners in Saudi Arabia
4 Election proposals may make the housing crisis worse
5 Tesco UK moves to scrap 350m tonnes of plastic per year
6 Davos 2020: Worlds of Trump and Thunberg collide on a Swiss mountainside
7 Who are Ireland’s 17 billionaires?
8 Court dismisses part of action over claim of ‘catastrophic losses’ on pension schemes
9 My father in a nursing home wants to gift me his house
10 Intel shares jump 7% on strong earnings and revenue forecasts
Real news has value SUBSCRIBE