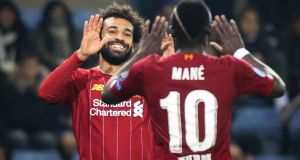 Liverpool sponsor New Balance has lost a legal battle to force the club to renew its contract, which expires in 2020. Photograph: François Walschaerts/AFP via Getty

Liverpool Football Club has won a multimillion-pound battle with New Balance, with a British high court judge ruling the company could not match Nike’s rival offer to use “superstar athletes and influencers” in marketing campaigns.

But part of Nike’s offer to Liverpool was that it would promote club products with “three non-football global superstar athletes and influencers of the calibre of” basketball superstar LeBron James, tennis ace Serena Williams and musician Drake.

Under the terms of its deal with the club, New Balance is entitled to renew its sponsorship of Liverpool if it matches the “material, measurable and matchable terms of a third-party offer”.

New Balance took Liverpool to court, arguing that it had matched Nike’s offer in relation to the marketing and distribution of Liverpool products.

But, giving his ruling in London on Friday, Mr Justice Teare found that “the New Balance offer on marketing was less favourable to Liverpool FC than the Nike offer” as the company could not match Nike’s offer to use “global superstar athletes”.

“It must follow that Liverpool FC is not obliged to enter into a new agreement with New Balance,” the judge said.

Liverpool had argued New Balance could not match Nike’s commitment to sell licensed products in “not less than 6,000 stores worldwide” and that the company had claimed it could do so in bad faith, but Mr Justice Teare rejected that argument.

However, the judge found that New Balance’s proposed deal did not include an offer to use non-football athletes and celebrities to promote Liverpool kit.

He rejected New Balance’s contention that that part of Nike’s offer was “too vague” and therefore not measurable, stating that “the evidence is clear that the calibre of such athletes or influencers can be measured in a variety of ways”.

New Balance applied for permission to appeal against the ruling but Mr Justice Teare refused, finding that there was not a “real prospect of success”.

The court also heard that Liverpool have spent just over £555,000 on the case, only 20 per cent of which will have to be paid by New Balance as the judge ruled against the club on its arguments on distribution, which he said would have made up “the greater portion of the costs”.

In a statement after the ruling, a Liverpool spokesman said: “Liverpool FC is pleased with the judge’s decision to rule in favour of the club following the legal dispute with our current kit supplier, New Balance.

“We will continue with New Balance for the current season, in combination with preparing next season’s Liverpool kits with our new supplier.”

A New Balance spokeswoman said: “We’re disappointed that we’re not able to continue our successful sponsorship of Liverpool Football Club.

“We know that fans value the unique and innovative kits we design and deliver that reflect the club’s heritage and recognise their past and recent triumphs.

“We believe strongly that we matched the competing offer and would have delivered many more years of record-breaking kit sales.

1 Ryanair and Eir the worst for customer service during Covid crisis
2 What to consider if older person or loved one needs care at home
3 Fair deal? Family at odds with hospital and each other not so sure
4 ‘Essential’ retailers risk a firestorm if they exploit the closure of the ‘non-essential’
5 PlanNet21 eyes further acquisitions after buying rival eCom
6 Glenveagh attracts growing hedge-fund interest
7 Level 5 restrictions risk pushing economy into double-dip recession
8 INM inspectors write to former directors in ‘inside information’ inquiry
9 Tinnitus group Neuromod raises €10.5m for expansion
10 Cabinet to agree on implementing EU travel plan
Real news has value SUBSCRIBE