'Let's Celebrate 2017' is a new report on the live entertainment industry has shown that the industry is responsible for over 11,000 jobs and €1.7 billion to the Irish economy. 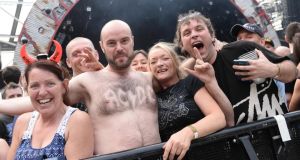 Fans waiting for AC/DC to come on stage at the Aviva Stadium in July 2015. New research claims that for every euro spent on live entertainment tickets in the State, an additional €6.06 is generated in the rest of the economy.

More than four million people went to a Ticketmaster concert or live event in Ireland between March 2015 and February 2016, generating an additional revenue of close to €2 billion, according to a new report highlighting the economic impact of the Irish live entertainment industry.

The purpose of the report, says its author and co-ordinator Justin Green, is to show the huge economic benefits to Ireland from live entertainment, from both ticket sales and additional revenue such as travel, accommodation, merchandise sales and food and drink. The report is available to download free, and Green hopes it will help gain greater support for Ireland’s live music industry, “in particular its artists, musicians, performers and the supporting industry as a whole”.

“The entertainment industry is frequently overlooked and not always respected as the viable and tangible professional industry that it is, unlike many other similar fields,” says Green in his introduction to the report.

“Unlike the position in many other countries, the overall live entertainment industry in Ireland does not have any representative body to represent its interests in a proper and unified manner. This is particularly disappointing in light of the level of recognition and respect our musicians, actors, dancers and various other performers gain internationally time and time again.”

The research for the study was carried out by London-based economists BOP Consultants, using data from Ticketmaster, and focusing on a one-year period between March 1st 2015 and February 29th 2016.

The study found that for every euro spent on live entertainment tickets in the State, an additional €6.06 is generated in the rest of the economy. A total of 4,045,771 people attended Ticketmaster events on the island of Ireland – 3,416,411 in the Republic and 629,360 in Northern Ireland. Of these, 280,569 were attendees from overseas.

Overall, €1.7 billion in net additional revenue was generated by live events in Ireland during the period, of which €669 million was net additional gross value added, defined by the researchers as money that would not otherwise have been generated had the events not gone ahead.

The live entertainment scene generated 3,728,441 bed nights, and created employment for an additional 11,331 people. “Live entertainment, therefore, is an essential part of Ireland’s economy and tourist sector, which is powered by the international appeal of Ireland’s cultural richness and the unique warmth and enthusiasm of Irish audiences,” says the report.

Theatre and the arts

Of the nearly 3½ million tickets sold for live events in the Republic during the period covered, 2,262,090 were for music gigs, 860,946 were for arts, theatre and comedy events, and 293,375 were for family events, attractions and exhibitions. Music events in the Republic generated €900 million in additional revenue, arts theatre and comedy generated €300 million, and family events, attractions and exhibitions generated €61 million.

The researchers acknowledge that the report does not represent the total attendance at live events in Ireland, as it covers Ticketmaster sales only, and nor does it capture the estimated 100,000 attendees at free events.

The report also measured the satisfaction rating of audiences at live events in Ireland, and found that almost all would recommend attending an event in Ireland to their friends and family. The researchers surveyed nearly 6,000 attendees at Ticketmaster events, who gave an average 8.8 out of 10 rating for the quality of the event they attended.

Green is a well-known figure in the Irish entertainment industry. As the marketing and public relations director at MCD concert promoters, he has co-ordinated the PR and communications for Irish concerts by artists such as U2, Beyoncé, Madonna, Jay Z, Riverdance, REM and Neil Diamond, at such venues as Slane Castle, Croke Park, the 3Arena, Aviva Stadium, Semple Stadium, Marlay Park and Páirc Uí Chaoimh. He runs his own consultancy firm, Wide Awake Communications.