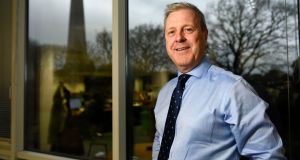 Mr McNaughton, who took over as director of the Insolvency Service of Ireland last year, has urged banks and personal insolvency practitioners to be “more collaborative” in their dealings with each other in order to resolve the large post-crisis backlog of insolvent mortgage cases.

The former banker, who worked on debt restructuring and insolvency cases at KBC Bank and Ulster Bank, said that it was “very worrying” that there were still 43,000 mortgages in arrears, including almost 28,000 for two years or more.

The number of personal insolvency arrangements – formal resolution cases where usually mortgage debt is written down to sustainable levels for borrowers – reached 1,055 in 2019, up 10 per cent on the previous year’s figure, he said, but the number being rejected by creditors such as banks, investment funds and so-called vulture funds was still too high.

Half of all proposed solutions have a 50 per cent first-time success rate at the initial meeting of creditors where they are proposed and that overall proposed personal insolvency arrangements only have a 60 per cent chance of converting into an agreed arrangement, said Mr McNaughton.

“There is a need for these two parties to come together and compromise, and to get comfortable with each other. The only way that the percentage of agreed solutions will rise is if banks and PIPs are more collaborative and come together to try to find a solution.”

Mr McNaughton said there were more than 700 cases awaiting judgment before the courts in review cases where creditors or personal insolvency practitioners object to a proposed solution. He hoped they could work through cases without resorting to the courts as more cases set precedents.

He urged banks and funds to be “more innovative” to minimise repossessions and keep people in their homes even where “debt-for-equity” solutions are “inconclusive”.

Such solutions allow creditors to take a stake in the home in return for a write-down of the mortgage.

Mr McNaughton acknowledged that there will be solutions where a mortgage is not affordable without a significant write-down even in cases to or below the current market value of the home.

He rejected the suggestion that he had become “poacher-turned-gamekeeper” by moving from banking to the insolvency agency, describing himself as “a fan” of the debt write-down regime.

“It’s something that the banks and the funds should be less defensive about,” he said.

The State’s insolvency remedies, introduced after the crash, should be attractive to banks because they are “holistic, transparent, time bound, structured and sustainable approach,” he said.