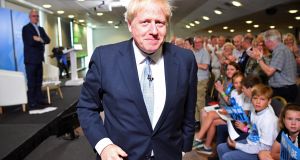 Boris Johnson has ruled out using the UK’s bailout loan to Ireland as leverage in the Brexit negotiations.

The front-runner to be Britain’s next prime minister was asked if the UK government should consider calling in an €8 billion loan made to Ireland during the financial crisis in response to Dublin’s “intransigence” over the backstop.

“We will engage generously and openly with our friends and partners in Dublin but we won’t be using that kind of tool in negotiations,” he told a Tory leadership hustings event in Exeter.

“It’s very important that we get this right with our friends in Dublin and, of course, we’ve got to be sensitive about the issue of the Northern Irish Border,” he said.

The UK government provided €8 billion in financial support to Ireland as part of a wider international bailout in 2010.

At the time, the UK chancellor George Osborne said it was in the UK’s national interest that Ireland had a successful economy and a stable banking system.

Mr Johnson said he would not allow a hard Border to emerge between Northern Ireland and Republic and that he was sensitive to the concerns of Taoiseach Leo Varadkar.

“What is absolutely non-negotiable, we will not have, under any circumstances, a hard Border in Northern Ireland,” he said.

He again raised the possibility that a technical solution to the Border issue could be found.

“The whole of the UK will come out of the EU, entire and united, without in any way prejudicing the government of Northern Ireland,” Mr Johnson said.

Mr Johnson, the favourite to succeed Theresa May as UK prime minister, has built his campaign for leadership of the Conservative Party on the fact that he can bring a new optimism and “positive energy” that will deliver Brexit.

He has dismissed warnings that the EU will not renegotiate the Brexit deal that Mrs May struck last year.

In his campaigning on Friday, he was challenged over “avoiding” head-to-head debates with rival Jeremy Hunt.

A woman asked: “In the words of Mrs Thatcher, are you frit? And if you are frit, are you fit to be prime minister?” He replied: “I don’t think anybody could have done as many hustings as I have done.

“I think one of the important things is not to, as Conservatives . . . not to spend too much time tearing great lumps out of each other in advance of the end of the contest.”