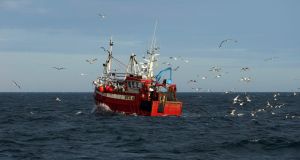 A fishing trawler in the North Sea, off the coast of North Shields, in England. UK waters are critical fishing grounds for Irish trawlers. Photograph: William Edwards/AFP

The Irish fishing industry has backed the European Union’s commitment to reach a trade deal with the United Kingdom on “continued, reciprocal access” to British fishing waters and EU fisheries markets.

The EU’s chief trade negotiator Michel Barnier said the economic bloc wanted a free trade agreement with the UK with “zero tariffs” and “zero quotas” that included a deal on fisheries.

The right of EU boats to fish UK waters and of UK producers to sell British-caught fish in EU markets is a crunch issue post-Brexit as both sides attempt to hammer out a trade deal.

British prime minister Boris Johnson said on Monday that British fishing grounds are “first and foremost for British boats”, while Mr Barnier said earlier in the day that a future EU-UK trade deal should provide “continued, reciprocal access to markets and to waters with stable quota shares”.

However, KFO chief executive Sean O’Donoghue warned that there was “a long way to go” in the trade negotiations and that the UK government “hasn’t shown itself to be a model of consistency in what are unprecedented discussions”.

Mr O’Donoghue said that as long as the EU trade negotiators “stick tight” to linking fisheries to any future trade deal, “there remains light at the end of the tunnel”.

“Any other outcome is too ghastly to countenance and the [remaining 27 EU states] must now remain united and strong to retain that crucial linkage between fisheries and trade,” he said.

The KFO has warned that a no-deal Brexit could result in between 4,300 and 5,700 job losses in an industry that employs 14,300 people mostly in rural, coastal locations.