Report by World Economic Forum also found that at the current rate of change, it will take more than two centuries for women to reach gender parity with men globally 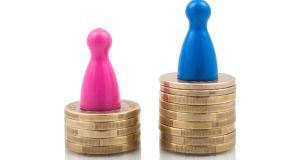 Ireland has dropped one place to ninth position among the most advanced countries globally in narrowing the gender gap, according to a new report published by the World Economic Forum.

The report also found that at the current rate of change, it will take more than two centuries for women to reach gender parity with men globally, assessed across four measures: economic opportunity; political empowerment; educational attainment; and health and survival.

Iceland holds the top spot in the index for the 10th straight year, having closed 85.8 per cent of its overall gender gap. It is followed by Norway, Sweden, Finland and Nicaragua. New Zealand and the Philippines have both moved ahead of Ireland in the past year, according to the report, while Slovenia has dropped out of the top 10 countries.

The latest data on Ireland “records a slight gender gap in enrolment in primary education, thereby reopening its educational attainment gap for the first time since 2015,” according to the report. “However, the country this year also records an improvement in gender parity on women’s estimated earned income”.

Last June, the Government published a Bill aimed at compelling employers to publish data on gender pay gaps, initially applying to companies with more than 250 staff, following on from similar rules that came into effect in the UK earlier this year.

The most recent figures from the Central Statistics Office show that women were paid 14 per cent less than men in Ireland in 2014, based on gross hourly earnings. That marked a widening from 12 per cent recorded two years earlier.

“Economies that will succeed in the Fourth Industrial Revolution will be those that are best able to harness all their available talent,” said Klaus Schwab, founder and chief executive of the World Economic Forum. “Proactive measures that support gender parity and social inclusion and address historical imbalances are therefore essential for the health of the global economy as well as for the good of society as a whole.”

Yemen, currently in the middle of a civil war that has produced what the United Nations has described as the world’s worst humanitarian disaster, has come in at the bottom of the list of countries assessed by the WEF, in 149th place, marginally ahead of Pakistan, Iraq, Syria and Chad.