The shortlist for ‘The Irish Times’ Innovation awards is revealed 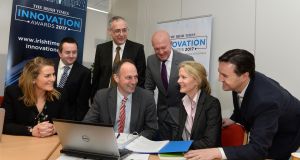 Teenage innovators behind an equine product reaching global markets and winning acclaim from famous racehorse trainers, and a device to easily control children’s internet activity: these are just two of the 21 impressive finalists shortlisted for this year’s Irish Times Innovation awards.

Having made it through the first round of judging, finalists will now present to a distinguished panel of senior business leaders at an event at the Royal Hospital Kilmainham next month. The seven-category award winners and overall Innovation award will be presented at a gala event in October. Over the coming months we will take a closer look in detail at all the finalists and the fascinating stories behind their innovative journeys. In the meantime, here is a very brief guide to the 21 successful entries so far, three in each of the seven awards categories.

Created on the back of a bright idea by fitness fan Niall McGrath while watching Nickelodeon with his kids one Saturday morning, Fulfil Nutrition vitamin protein bars have proved to be a sales sensation in just a matter of months. It aims to capture the global trend towards fitness and healthier eating, while proving that healthy bars can be better for you but also tasty.

Co Limerick-based agritech group BHSL has developed a uniquely innovative technology that transforms a cost centre in the poultry production sector (dealing with waste manure) into a source of fuel, thereby driving farm profitability through reduced energy bills. Heating bills are an enormous drain on poultry farms and BHSL’s innovation could really change for the sector.

Amid the recent horsemeat scandal and ongoing concerns over food traceability, Belfast firm Arc-Net is successfully tackling food fraud. The data firm has built an industrial-grade blockchain technology platform to provide traceability and authentication services for the food industry. It gives food producers the ability to have independent validation of their food quality, thereby reassuring customers.

Energy and the environment

With an increasing public focus on water quality and pollution, NUI Galway spin-out company, NVP Energy offers novel technology that treats wastewater and produces surplus energy at the same time. Prior to the introduction of this technology, the process required significant electricity input and produced large quantities of sludge requiring treatment and disposal.

Construction workers are always concerned about what pipes and cables may lie underneath when they start to dig. That’s why software firm Utilix, set up in Australia by Tipperary native Oliver Morrissey, has been described as “the Google Maps of the underground”. Its app offers construction workers a vision of what’s underneath the ground before they begin to dig, avoiding dangerous and costly accidents. It is already a hit in Sydney and is now being rolled out on this side of the planet.

UrbanVolt provides light as a service, removing all the financial, technical and operational risk from an LED upgrade. Focussed in particular on commercial and industrial premises its backers include rugby star Jamie Heaslip. The firm invests its capital installing energy-efficient lighting for businesses with no up-front costs, delivering immediate increase in cashflows to businesses, with an agreement to split the energy savings between both parties over five years.

Galway firm Econiq has created the Conversation Hub, which simplifies high-value complex conversations, interpreting information in real time and guiding support staff towards the best solutions. Its latest innovation, the Hub Crafter, pulls together conversations from a range of situations and digital contexts for users such as trainers and managers.

With a focus on recouping VAT for businesses, Taxback International latest advance helps recoup VAT repayments lost due to poor auditing within firms. In particular it aims to help employees, particularly those travelling for business, to maximise their VAT reclaim potential.

With so much focus on children’s internet usage, iKydz helps parents by providing full content-filtering and blocking, social-media management, access schedules and event the ability to block internet access to a specific device. It can all be done through an app on your phone and a box that plugs in to your router, and it can be used by anyone – no IT experience necessary. On the app, each device connected to the router is listed individually, allowing you to control what access each device has.

A revolutionary new device developed by Limerick Institute of Technology graduate Rob Laffan utilises automation technology to assist people with conditions such as autism to communicate verbally. Inspired by his four-year-old daughter Sadie, who has autism, Laffan developed TippyTalk, a device that allows a user to select preloaded wants, needs and feelings on a tablet device and communicate them via a text message to a parent, friend or carer.

Usheru aims to not only show you cinemas and times around you, but recommend movies, times and locations, as well as keeping you up to date on any offers going on at your local. The app, after just a little use, will begin to recognise your cinema tastes and begin to recommend movies for you, in locations near to you, at times that suit you. Earlier this year the firm teamed up with Universal to promote its new film, Fifty Shades Darker.

Irish tech start-up HealthBeacon has created a device that not only ensures patients adhere to their injectable treatments but also allows them to dispose of medication in a safe way and keep carers up to date with patients’ progress. The technology has already caused a stir on both sides of the Atlantic.

Superbugs are forecast to kill 10 million people worldwide by 2050. Kastus, based at the Greenway Hub at DIT Grangegorman, has developed Log4+, an antimicrobial coating that can be used on ceramic or glass surfaces to protect against superbugs such as MRSA and E.coli.

UCD-based start up Valitacell has big plans to provide specialised services for the world’s biggest pharmaceutical companies. The firm’s product focuses on the specialised area of biological drugs – drugs produced using genetically engineered cells – and saves companies money and time when setting up production of a biological drug.

Kildare firm Ash Technologies has developed the Omni, an advanced digital microscope that has a powerful image-processing and control engine that delivers superb full HD live video image quality at 60 frames per second. Among its many benefits is the ability to share the image among multiple users.

Dún Laoghaire start-up Hal Software has created a system for quickly and efficiently conceiving prototype automated manufacturing systems for the likes of the pharma or oil and gas sector. At its core, the Spike Prototype software is a design tool for the procedural aspect of a plant and it has already received international recognition.

Award-winning Sligo firm Restored Hearing has created Sound Bounce, a smart acoustic material for use in the automotive, aerospace and construction industries. It comprises a naturally occurring active material, can be tuned to different frequencies and is more than 30 times thinner than traditional soundproofing materials.

Cork engineering firm RGSK has developed the Rotarail, an articulated arm on a pivot that is fitted to the side of trucks and trailers to prevent either pedestrians or cyclist getting between the wheels. The device is fitted to existing safety rails on the side of trucks, but sits at a much lower level. It can do so as it’s hinged to fold back up when the rail encounters obstacles such as speed bumps or ramps. Up to now rails could not be too low as they could be broken off or badly damaged by these changes in road height.

The Grippaz, developed by Kit Industrial Trading, is a patented disposable work glove with grips on both the inside and out to give users a better grasp when working. The gloves are aimed at the automotive sector and for protective work and are sold in boxes of 50 for use in DIY as well.

FenuHealth was founded by teenagers Kate and Annie Madden. The Co Meath-based equine start-up offers powder supplements that can be added to horse feed to solve the problem of gastric ulcers in horses. The products – FenuSave for preventing the ulcers and FenuCare for treating horses with them – cost less than 10 per cent of the price of leading rival products and have received testimonials from numerous top trainers, including Noel Meade.