On the frontline of the gig economy 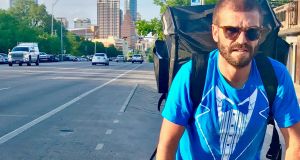 John Holden: “Now pushing 40, I’m still as defiant as ever when it comes to joining the rat race.”

The gig economy is liberating millions of workers around the globe from the shackles of traditional, rigid shift-based working conditions. Drivers for Uber, hosts for Air BnB and deliverers for Favor get to choose when, where and how they work. This pioneering generation of workers in the digital age are the first to exercise autonomy of their work schedule.

Technology continues to undermine many of the practices once understood to be intrinsic parts of any functioning working environment.

So if you still think the “flexi-time” your employer offers makes your office hip, you may need to re-examine your understanding of hip. “Flexi-time” is the MySpace of modern labour scheduling.

Welcome to the gig economy – where even the lowliest of worker is master of their own destiny. At least in terms of time.

The gig economy business model – which has created giants like Air BnB and Uber – is predicated upon significant advancements in ubiquitous technologies such as GPS, real-time communication platforms and cloud-based data storage – all of which can be accessed on the supercomputers in our pockets which we still dotingly refer to as “smartphones”. (First of all they’re smarter than us. Second, if you can even remember the last time you used the device as a “phone”, the Irish Times Innovation Editor will give you a personal tour of our iconic Tara Street HQ followed by lunch at Chapter One. Not.)

The fundamental nature of the new “gig economy” – inhabited by stalwarts such as Uber, Lyft, Air BnB, and Texan-based delivery service Favor, has always intrigued me. Aside from a two-year stint teaching at a Dublin VEC (where I enjoyed paid leave, health and insurance benefits as well as full security of tenure), most of my adult career has – thus far – been spent actively pursuing two notoriously insecure and poorly paid professions: journalism and music.

While I have no desire to switch careers and become a taxi driver or delivery guy full time, I have been drawn to the “laissez faire” timetabling approach central to the pseudo-libertarian business model that appears to be governing a sector inhabited almost entirely by independent contractors.

God love them. Don’t get me wrong. The freedom is great and everything. But the fluctuating monthly pay checks and inability to plan anything too far in advance for fear some freelance project might come up would send almost everyone in the “settled” working community into a tizzy. Maybe it’s just in my head but does anyone else without a steady income hear sniggering every time they walk into a bank to cash that badly needed cheque?

“I didn’t want any of your stupid tailored mortgage options anyway” is what I usually mutter under my breath once I’m a safe distance from all that fiscal laughter. It’s enough to make any freelancer demand paid leave for work-related stress. But who would listen?

What this pecuniary diatribe hopefully illustrates is my authority to speak on behalf of the independent contractor. Now pushing 40, I’m still as defiant as ever when it comes to joining the rat race. Much to the chagrin of my younger, more responsible husband who (wrongly) assumed marrying someone 10 years his elder might improve his chances of ultimately enjoying a stable and financially secure life. Ageism works both ways. Never assume older people will inevitably pursue security, safety or stability. Stubbornness? Perhaps. Security? I wouldn’t bank on it.

With slightly more red tape involved in the application process for ride sharing, I decided to try my hand as a delivery courier for Texas-based, delivery specialists Favor. While the majority of Favor staff do their jobs by car, motorbike or moped, I chose the humble pushbike as my mode of transport – despite its speed limitations, which directly affected the number of deliveries that could be made per shift, and consequently, how much money I was likely to earn.

Favor provides its delivery staff with an app, a credit card and a large bag for carrying orders, the majority of which tend to be takeaway food. “Runners” as they are referred to, are reliant on the gratuities given by customers who are encouraged by Favor to tip 20 per cent or more of the total cost of their order. This, it must be noted, is on top of the $5 fee Favor itself charges for simply using the service.

A runner’s financial welfare isn’t entirely dependent on the generosity of his/her customers though. A $2 minimum tip is enforced and Favor will top up a runner’s hourly rate to $9, during slow periods.

Bar a few restrictions – such as alcohol and large quantities of cigarettes – Favor will deliver almost anything to anyone at any time. This reporter delivered tampons, baking powder, a single McDonald’s hamburger (a fraction of the cost of using Favor) as well as a hundred dollars worth of sushi to a single customer.

So far, none of this may sound all that revolutionary. How does any of this reflect a sea change in terms of the rules which have governed the labour market since the dawn of the industrial age?

In Favor’s case, the company publishes a schedule once a week used by runners to confirm availability for shifts on a “first come first served” basis for the following week. But while cancelling shifts – particularly without adequate notice – isn’t encouraged, it isn’t deemed so unacceptable as to warrant any major disciplinary action to be taken.

While my experience of different working environments may be limited compared to most, honestly I have never encountered an organisation run in such a laid-back way. I frequently asked myself what it must take to get fired.

It seems to work. Numerous studies have shown that the greatest incentive for those who drive for Uber, for example, is the freedom to schedule one’s own hours.

But everything about the gig economy smacks of impermanence, a state which is perpetuated by both employer and employee. After my name, for example, one will find a series of important letters – such as HDip, BA, MA and even MSc. A person with such credentials, therefore, was never meant to make a career out of such menial work as delivering pizzas. However, many readers will already be familiar with some variation on this reporter’s snobby attitude as it is routinely mimicked by other (talkative) Uber drivers. Feeling obliged to justify any involvement in this ride-sharing lark as little more than a temporary sidestep away from their true passion – acting, horse racing, triage, dubstep production, biochemistry, whatever – belies the fact that more and more people are working as full-time Uber drivers or Air BnB accommodation hosts than ever before. They just don’t want to admit as much.