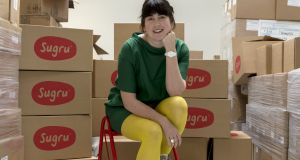 The company behind Sugru, a fix-all mouldable glue product invented by Irish woman Jane Ní Dhulchaointigh, has raised £1.9 million (€2.24 million) from a crowdfunding campaign to expand into new markets and commercialise its latest product.

The parent company, FormFormForm, was originally targeting £1.5 million when it opened its campaign in late March. However, it extended the funding round by a fortnight due to heavy demand from investors.

More than 2,600 investors backed the latest campaign which closed on Friday, giving them a 5.4 per cent stake in the business.

“Our business is all about community so crowdfunding sits well with this and between a third to two-thirds of our investors are customers who love Sugru,” she added.

Sugru is an adhesive that moulds like play-dough, sticks to almost anything and turns into a strong flexible rubber within 24 hours. The product, the name of which derives from the Irish word súgradh (play), is used to repair, build, seal, fix, create and stick things. It is sold in over 170 countries and has more than 2 million users worldwide.

In 2010, Time magazine listed the product as one of the top 50 inventions of that year.

More than 10 million minipacks of the flagship product have been sold to date through over 5,000 stockists globally including B&Q and Target.

“We’re looking for Sugru to become as well known as Coca-Cola. I think over the next 10 to 20 years we’re going to see repairing becoming as popular as recycling and obviously Sugru is ideal for this,” Ms Ní Dhulchaointigh added.

This is the second time the company’s parent has turned to crowdfunding platform Crowdcube to raise money, following a successful campaign in 2015.

Back then, the campaign was overfunded 355 per cent above the original target of £1 million, with 2,700 investors from 68 countries. It broke equity crowdfunding records with the largest single investment of £1 million.

The company has built a loyal following over the years through social media, and has a community of “fixers” who share their latest Sugru hacks, which include solar chargers for mobile phones and GoPro bike mounts.

FormFormForm, which is looking to extend its reach in Europe and expand into Canada, Australia and New Zealand this year, is shortly to launch a new formula aimed at families.

The Hackney-based firm has raised almost €13 million in total over the years and is currently valued at over €39 million. It employs 70 people.