PEL Waste’s Britebin: leading a revolution in the waste business

Irish Times Innovation awards finalist in the manufacturing and design category has won contracts in the UK, Norway, Belgium and the US 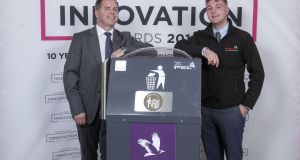 Created by Balla, Co Mayo based PEL Waste Reduction Equipment, BriteBin is a solar powered smart bin which only needs to be emptied every few days, has up to 10 times the capacity of a standard open bin, alerts the owner when it needs to be emptied, and cuts down dramatically on street litter and nuisance from seagulls and other wildlife.

“If you look at a standard street bin it’s an open unit which you put waste put in and it gets emptied periodically,” says PEL founder Tommy Griffith. “The Galway City Council bins on Shop Street are emptied four or five times a day, for example. The BriteBin cuts down on this quite dramatically.”

In recent tests, Greenwich Council in London found that it only had to be emptied every two or three days as opposed to four or five times per day for standard open bins.

The bin utilises a standard 120 litre polyethylene wheelie bin as its internal waste storage unit. Built in solar powered motorised compaction system considerably increases the bin’s holding capacity. It also features an integrated wireless waste level sensor, which monitors litter levels in real time, and communicates that back to the owner via PEL’s cloud-based data management platform, which in turn issues an alert when a bin needs to be emptied.

This real time monitoring and alert capability lets the municipal authority or other bin owner concentrate resources only on those bins which actually need to be emptied, thereby improving the overall efficiency of the collection service.

“There is a sensor looking down into the bin all the time,” Griffith points out. “When it hits a certain level it auto-compacts and keeps doing that until it’s full when it alerts the owner to empty it. It’s green, labour reducing, and reduces costs. The owner can log in and see the waste level at any time.”

The bin also addresses the climate change issue, he adds. “It reduces the number of trucks on the roads and cuts down the amount of litter to be collected. Overflowing bins and seagulls are a thing of the past as well thanks to the sealed unit. Waste falls into a standard wheelie bin of 120, 240 or 360 litres. These can be lifted using the standard hoists on a bin truck thus improving health and safety. The beauty of the BriteBin is that it ticks all the boxes for the world we are living in. By enabling waste collection on demand, we are Uberising waste.”

The system is connected by GSM to the SigFox internet of things (IoT) system. “SigFox is a low energy, low cost way of doing it,” Griffith explains. “It uses the old long wave radio frequency so uses less energy at a lower cost. We use the LoRa long range network in other countries. The BriteBin also has MBIoT (Microchip Bluetooth Internet of Things) connectivity so it is compatible to all networks.”

That connectivity offers other advantages. “The bin on the street is no longer a bin,” he says. “Our bin is becoming a street hub. It senses temperature and can send fire alerts. It can be an emergency phone charger if fitted with a USB connection. We are also looking at other applications. The bin is an important piece of real estate on the street and we are looking at what it can for people.”

The BriteBin is somewhat of a natural progression for the company. “We’ve been in the manufacturing of waste equipment since 2005,” Griffith points out. “We developed a glass bottle crusher that fits under a bar counter. The solar bin then came in, but the manufacturers had power issues. We started developing in the BriteBin in 2016 and launched it in January of 2018. We currently have 600 units installed in Ireland, the UK, Norway, Belgium, Israel and the US.”

The future will see the company building on that early success. “We are knocking on doors hard,” he says. “I am just back from Croatia, for example. Every country has an issue with street waste. There is one bin required for every 253 people and there are 33,000 bins on the streets of London. The congestion charge for a truck to go into central London is £150 and waste companies don’t want to go in if they don’t have to. We have 23 staff in PEL at present and plan to double that over the next 36 months. In addition, we have about 40 to 50 indirect employees. It is a product that will go global. We are working on tenders every week and working hard to set up distribution networks around the world.”