Paddy Cosgrave hits out at Irish ‘corruption’ and housing costs 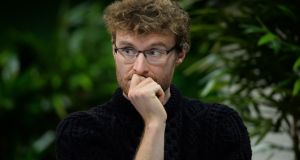 The co-founder and chief executive of the Web Summit Paddy Cosgrave has again questioned the level of corruption in the Republic while calling for fresh action to end the housing crisis.

Mr Cosgrave last year said he was personally taking steps on the matter by encouraging the chief executives of many of the world’s largest tech companies to co-sign a letter urging the Government to pass anti-corruption legislation.

Speaking at a press conference in Dublin on Wednesday he suggested his previous call for action had not been well received in some quarters. He claimed he had received firm assurances from the Garda that corruption was not an issue.

The Garda was contacted about Mr Cosgrave’s assertion by The Irish Times but said it did not comment on named individuals.

Mr Cosgrave also claimed there had been a “cacophony of voices saying it [corruption] was a non-issue.”

He claimed he had been assured by the Government that anti-corruption legislation was to be passed last summer. “No emergency legislation has ever sat in the history of the State for this long and if there is no corruption in the country I see no issue in passing this,” he said.

The Criminal Justice (Corruption Offences) Bill 2017 was at report and final stages in the Seanad on Wednesday and is expected to be signed into law by President Michael D Higgins soon.

The company is also intending to help employees who are struggling with accommodation costs in the Republic. Previously, the company issued a rent supplement for staff. This has now been expanded to cover those with mortgages, and applies to employees who live within 2km of the Web Summit headquarters in Darty, one of south Dublin’s most expensive areas.

Web Summit estimated the “modest” supplement would be the equivalent of one month’s rent or mortgage payment a year.

Mr Cosgrave said Irish housing policies, “continue to be bad for business, unless your business is being a landlord”.

He added it was time to unwind some of the housing-related policies that were introduced during the recession.

“If some of the largest and most profitable companies in the world like Amazon and some of the most exceptional emerging ones like Stripe are very openly talking about housing challenges in Dublin then I think they are very real,” Mr Cosgrave said.

The Web Summit chief executive also warned of the State’s reliance on big multinationals such as Google, saying there was a “systemic risk” associated with being so heavily dependent on such companies given the possibility of changes to the international tax system.

Mr Cosgrave refused to confirm whether Web Summit will take place in Lisbon again next year, noting he and his colleagues had held talks with politicians in a number of European cities in recent weeks. However, he indicated that MoneyConf, which has moved from Madrid to Dublin, will likely stay here for the foreseeable future.

The event, which was spun out from Web Summit, is to take place at the RDS in less than two weeks with Joseph Lubin, co-founder of bitcoin rival, etherum, among the speakers.

He said he expected more attendees to sign up for the Dublin event over the next week or so. He also said the number of partners has risen from about 15 to 50 this year.

Among the other speakers due to appear at this year’s MoneyConf, which will take place from June 11th to 13th are Valentin Stalf, founder and chief executive of N26 , Kristo Kaarmann, chief executive of TransferWise, and Kathryn Petralia, chief operating officer of Kabbage.