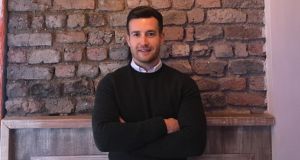 RYPT co-founder Cormac O’Beirne said the app is “very person-specific and is as relevant for the casual gym user as it is for elite athletes”.

Cormac O’Beirne is a product designer and former semi-professional rugby player who has used both skills to develop Reach Your Peak Trainer (RYPT), a newly-formed fitness business co-founded with Diego Becerra and his brother, Daniel.

RYPT is a web-based personal training solution for gyms designed to help them engage with and retain members more effectively. Right now, O’Beirne says, gyms have two problems: dealing with the shortcomings of old-fashioned paper-based systems for assessment and monitoring and holding on to members.

RYPT tackles both by replacing paper with a smartphone app and keeping people more committed (and therefore less likely to drop out) by providing them with easy access to their personal fitness, nutrition and progress monitoring information. The solution can also be used by personal trainers and strength/conditioning coaches for sports teams.

“Gyms and health clubs are battling an average member churn rate of 28 per cent due to a highly competitive marketplace and the entry of low-cost providers. Globally, this is costing them almost $22 billion a year in lost membership revenue,” O’Beirne says. “The cost of acquiring a new customer is roughly double that of retaining an existing one, so more and more gyms are beginning to focus on member retention by improving their customer service.

“RYPT is different to existing products and systems because we are completely focused on giving gyms superior tools, such as AI-powered nutrition and training load management solutions, with which to greatly improve the standard of their personal training offering and increase member satisfaction. Most fitness solutions try to do too much. RYPT is very person-specific and is as relevant for the casual gym user as it is for elite athletes.”

O’Beirne says the paper-based assessment processes still used in most gyms are hampering fitness professionals when it comes to offering the sort of tailored programmes likely to keep clients engaged.

“Most new gym members are given a workout on a sheet of paper and will be told to follow that for a given period, but this assumes adequate knowledge of exercise technique, the person has to have the sheet with them all the time and it requires them to be self-motivated,” he says.

“We know from experience that this is not reality and can lead to loss of motivation and membership lapse. By using our system to deliver personalised programmes directly to members’ smartphones, trainers can monitor an individual’s progress, identify those at risk of lapsing and give them the support they need to get back on track.”

The company is still finalising its revenue model, but it will be subscription-based on a sliding scale depending on the number of people using it. Beta testing took place last September and the product went live in Ireland in January with seven customers including personal trainers, gyms and sports clubs such as Kilmacud Crokes. The company has just signed its first US client and a full launch will take place later in the year.

O’Beirne believes RYPT has the potential to go global and the company has its sights set on capturing a slice of the UK market, which has more than eight million gym users, and the US which has more than 56 million. The product is currently in its first release but there are plans to add functionality and to integrate it into wearable technologies in the future.

This self-funded, bootstrapped start-up has contained costs to under €20,000 to date by doing almost everything in-house. O’Beirne originally had the idea for RYPT in 2015 and the founders have developed it over the last two years while working full time. Prior to quitting his job last August to focus on RYPT, O’Beirne was a research and development design engineer with HP. RYPT is based at LINC in Blanchardstown IT and O’Beirne is currently on its Enterprise Ireland-backed New Frontiers programme for start-ups.